Transilvania Pitch Stop 2015 - Call for projects from Romania and Moldova 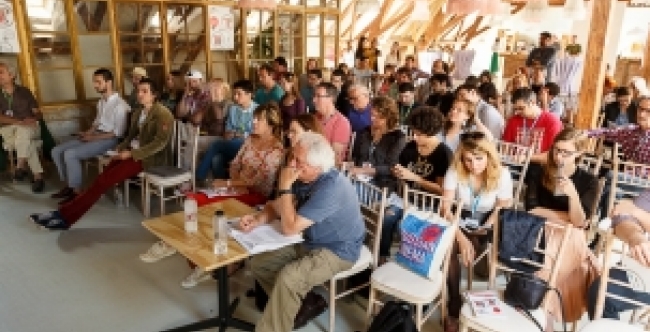 Transilvania International Film Festival (TIFF) is organizing between 31st of May - 6th of June 2015, the second edition of the programme Transilvania Pitch Stop (TPS).

Dedicated to filmmakers from Romania and the Republic of Moldova, TPS is an industry event which aims to discover and encourage a strong selection of fiction feature films in an early stage of development and to offer training and a network platform for upcoming filmmakers and their producers. The deadline for submission is 17th of April 2015.

TPS offers to the participants the opportunity to be a part of a custom made script development and packaging workshop and to prepare their projects to be publicly presented in an event open to the industry guests, followed by pre-booked one-to-one sessions. Eligible for submission are all first and second time directors from Romania and the Republic of Moldova who have a fiction feature film project in early development stage. It is recommended – but not mandatory – for the project to have a producer attached.

Up to five projects will be selected by the selection board and the director and producer (if attached) will be invited to Cluj-Napoca to attend the Transilvania Pitch Stop workshop days during TIFF. Working groups (project team and tutors) will be created. The group work will focus on ways of packaging the project in order for the team to be prepared for the public pitch, as well as on script doctoring feedback. In addition, special attention will be given to the interaction between groups and to a better acquaintance with all the projects, the free exchange of ideas and opinions being heavily encouraged.

The two tutors invited to work closely with the selected participants are Christian Routh (script consultant) and Konstantinos Kontovrakis (producer) and they have been engaged in Transilvania Pitch Stop since the first edition.

The five projects will be closely monitored by the invited Romanian and international decision makers of TIFF 2015 during the pitching session and the one-to-one meetings.

Two projects will be awarded by the TPS jury composed of three leading experts.

The two projects awarded at the first TPS edition were Father Moves Mountains/Tatăl Mută Munții by Daniel Sandu and Marița/Maritza by Cristi Iftime; the latter project is produced by Hi Film Productions, has won a Romanian Film Center production support for first features and was selected in the ScripEast 2014-2015 script development programme. As a result of the joint partnership between Festival del film Locarno and Transilvania IFF, the two directors were invited to attend the matchmaking framework of the Locarno Industry Days.

All those eligible and interested in submitting their projects for this year’s edition of Transilvania Pitch Stop are able to do so until 17th of April 2015. The submission process is fully online and requires an eventival.eu account following the link https://vp.eventival.eu/tiff/2015.

All required documents can be found under TPS rules and regulations section.

More details can be found on www.tiff.ro and at tps@tiff.ro.