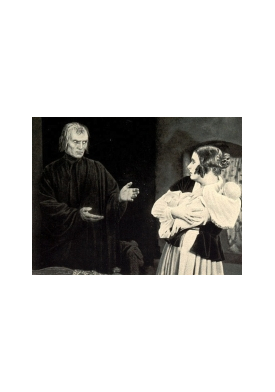 In the loving memory of Alex Leo. Şerban

Just arrived in a small German village, two young lovers suddenly meet Death. In the form of a lonely stranger, Death kidnaps the man and locks him away behind a tall wall, without windows and doors, next to the cemetery. Trying to save him, the young woman is able to find a door after a vision she has in her dream. Beyond the wall Death awaits her, and presents the woman with three tests, each one short as a candle burning itself out, through which she can save her lover. She is transformed, one at a time, in a Persian, Venetian and Chinese woman, but proves unsuccessful in her tryouts. Impressed by the girl's faith, Death offers her one last chance. She has an hour to convince someone else to die in her lover's place.

The scenes that take place in Persia, Italy, China or Germany allow he ensemble to use traditional musical motifs, but also to imagine original themes and experimental passages, based on Emil Botta's metaphorical lyric.

At the Transylvania International Film Festival, the Einuiea Music Ensemble and actress Crenguţa Hariton had similar projects in Cluj and Sibiu, mixing film, music and literature together for Nosferatu (2007), The Fall of the House of Usher (2008) and Waxworks(2009).