2017, a Record Year at Transilvania IFF 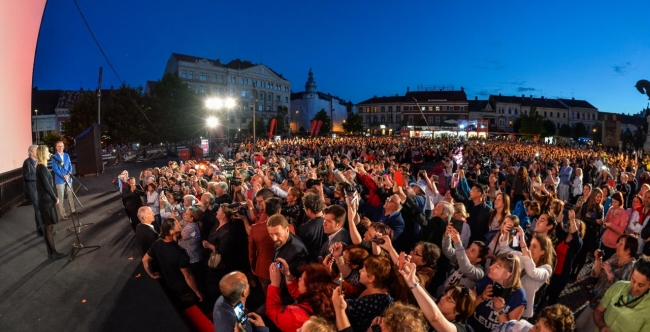 Over 90,000 tickets were sold to the 225 films from 53 counties — almost 14% more than in the previous year. Online tickets also registered an uptick, as 38,9% of the total number of tickets were bought online — 13.72% more than in the previous year. 130,000 participants came to TIFF, including for the free open-air screenings, workshops, launch events, exhibitions, and debates, and over 1,200 Romanian and foreign guests came to Cluj over the 10 days of the festival.

The absolute per-screening record in the entire history of the festival has now gone to For a Cop’s Hide, which screened in the Unirii Square in the presence of Alain Delon — 3,312 tickets were sold for that. The opening film for the festival, King of the Belgians, also registered a record number of participants — over 3,000. The Banffy in Bonțida hosted an audience of over 2,000 for the Metropolis cine-concert, a record for the Weekend at the Castle events at TIFF. Also in the top box office successes of the festival are The History of Love (3,000 tickets), Like Crazy, and the closing night May God Save Us, each of which had over 2,000 seats in the Unirii Square.

The number of sold-out events is another record: 27 screenings and special events became quickly sold out. Among them: the Doom Room installation sessions at InfiniTIFF, the cine-concerts  in churches, the Film Food events, the winner of the Golden Bear, On Body and Soul, and The New Gypsy Kings. Romanian films also raked in entries: the world premiere of Iulia Rugină’s Breaking News, Andrei Dăscălescu’s Planet Petrila, and Radu Jude’s Scarred Hearts, the winner of the Romanian Film Days grand prize for feature-length films. The tickets for the last day’s screening of the winning films also sold out immediately: My Happy Family (winner of the Transilvania Tropy), Heartstone (directing and audience awards), and God’s Own Country (special jury award).

A selection of this year’s films, including the award-winners can be seen June 15-18 at Cinema Elvira Popesco during TIFF Bucharest. Full program here: http://tiff.ro/tiff-bucuresti/program

Transilvania IFF 2017 also had online success: the mobile app had over 12.000 active users, an 180% increase over the last year. The www.tiff.ro website, which was continuously updated during the festival, had over 82.889 unique visitors, almost double from 2016, with 1,012,158  visits.  The official blog, blog.tiff.ro, had over 22.699 visits, 74,4% of which were from new users. The closing night red carpet, transmitted live on Facebook, was seen by 54.634 and had an organic reach of 381.744.  The video clips posted this year reached over 1,8 million views on Facebook, the opening night album was seen 116.227 times, while the Alain Delon’s meeting with his fans in the Unirii Square generated the most reactions, comments, and shares.

About 400 volunteers aged 15-43 saw to the festival’s good running this year. Some of them even came from abroad to be part f the team. Alongside of Romanians, some of whom traveled long distances to volunteer for the festival, Transilvania IFF had volunteers from France, Italy, Lithuania, Great Britain, Moldova, and Spain. 50 of them were nominated for Volunteer of the Year, and 9 of them will have the opportunity to work in partner festivals.

The famous Alain Delon, who received a lifetime achievement award,  was impressed with how fans received him in the Unirii Square: “I saw 3,500 people in one square. I am neither de Gaulle nor the President of the Republic. It’s impressive. I was pleased,” he said. Armand Assante also declared himself happy: “Cluj grew tremendously, and so did TIFF. When I was here the first time, the festival was very small, but now it is grand. As for the city, it shows some serious investment. It extended a lot I don’t know any details, but I can see this change with my own eyes and I think it will continue to grow,” the actor said at the world premiere of Dragoș Buliga’s The Wanderers.

A great admirer of Romanian cinema, film critic Geoff Andrew, who was a member of the jury for the main competition, said that “Romanian cinemas is one of the most interesting in the world. Sometimes countries go through a good period, but the last decade or more, Romania has been making extraordinary films with very few resources.” Another important presence in the jury, actor Clotildea Courau was also impressed: “TIFF is very good for the city because it opens opportunities for filmmakers. This is what festivals are for. I would like to come to Cluj for six-seven weeks, to talk to directors, students, and make plans. It would surely be fruitful,” she said.

Another premiere in the history of Transilvania IFF: Eurimages, the Council of Europe co-production fund awarded its 20,000 euro Eurigames Co-production Development Award in Transilvania Pitch Stop.