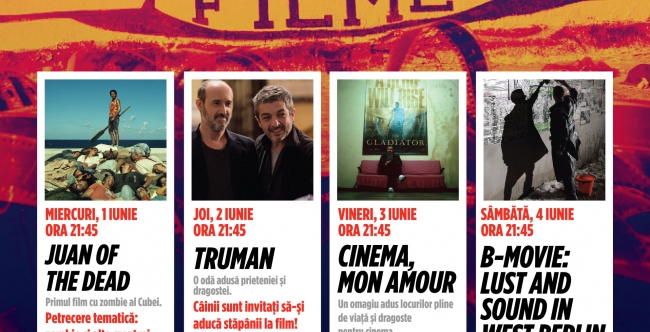 On Wednesday, June 1, the Cuban zombie comedy Juan de los Muertos (dir. Alejandro Brugues) will be followed by a Full Moon horror party, with the dress code vampire-zombie. On June 2, the locals are invited with their pets at Truman (r. Cesc Gay), an ode to friendship and love, in which a dog plays an important role in the life of his master.

Cinema, Mon Amour, a documentary about the last surviving state-owned t Romanian cinemas will play on June 3. The screening will be preceded by the VICE documentary North Korean Movie Madness, a foray into filmmaking in North Korea.

On June 4, the film B-Movie: Lust and Sound in West Berlin, a documentary about music, art and chaos in West Berlin in the '80s, will appeal to those fascinated by the period before the fall of the Berlin Wall, 1979 - 1989, when the city became a melting pot of musical subcultures. Celebrities and artists from around the world were enjoying together with the squatters an unconventional lifestyle and decadent city. The documentary features archive footage starring Nick Cave and Blixa Bargeld (guitar and vocals in Nick Cave & the Bad Seeds).