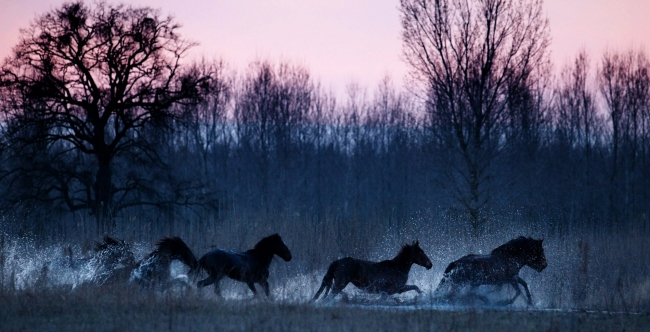 In the sixth day at Transilvania IFF the public is invited to meet the famous director Claude Lelouch, to attend masterclasses held by Michel Ciment and Pen-Ek Ratanaruang, to see the spectacular film Iron Sky, to listen cult-band Laibach and to celebrate the Hungarian Day.

The impressive career of French director Claude Lelouch (aged 74) will be honored at Transilvania International Film Festival 2012, where he will receive the Lifetime Achievement Award. The ceremony will start with the screening of A Man and a Woman at 20.30, Cinema Florin Piersic. The film brought Claude Lelouch the Palme d'Or and two Oscars in 1966. The celebration continues in the 3X3 program with two more films: D'un film a l'autre and Les uns et les autres, awarded at Cannes in 1981.

Hungarian cinema will have its proper celebration during the already established Hungarian Day program. At 16.45, Cinema Arta, the audience will have the chance to see the famous actress Mari Törőcsik in the special screening of Love/Szerelem, directed by Károly Makk, the film which brought her a Special Mention at Cannes in 1971. The actress will receive the Lifetime Achievement Award at the Closing Ceremony, on June 9 at Teatrul National (National Theatre).

At Casa de Cultură a Studenților, starting at 18.30, the audience will have the chance to see Just the Wind/ Csak a szél directed by Benedek Fliegauf.  Based on true events, the film was awarded with Amnesty International Film Prize at Berlin Festival 2012. It is the story of a Romani family leaving in terror, after a series of racist murders swept the neighborhood.

At Cinema Arta, from 14.30, we recommend Judith Elek's Retrace/ Visszatérés. The second title in Hungarian Day shows the returning journey of a woman who survived the Holocaust and now, after many years, finds a different world in the place where she was born. At Odeon Cineplex at 19.30, film buffs can watch the last title in Hungarian Day is  Hungary 2011/Magyarorszag 2011, an omnibus film initiated by director Béla Tarr along with 11 Hungarian directors.

The Hungarian Day closes at 21.30 with a concert held by Koszika & The Hotshots at TIFF Art (Art Museum).

An incredible evening awaits the TIFF audience on June 6. In Ursus Open Air (Unirii Square). At 21.45. the wacky SF comedy Iron Sky will be screened in the presence of director Timo Vuorensola. After the film the legendary band Laibach will hold an exceptional concert at Hotel Continental, at 23.45.

Transilvania Talent Lab continues the exclusive program with two masterclasses, at the established location at Napoca 15. Wednesday, June 6 at 12.00, Michel Ciment, film critic and Honorary President of FIPRESCI will host a master class entitled Stanley Kubrick, entre raison et passion, as well as a presentation of the notorious magazine Positif, celebrating 60 years of existence. With this occasion, at 19.00 at Cinema Arta will be screened the documentary Once Upon a Time…A Clockwork Orange.

The New Thai Cinema comes at TIFF in the person of director  Pen-Ek Ratanaruang who will star in a masterclass beginning at 15.30 also at Napoca 15. He comes at the festival with his latest feature film, Headshot, one of the highlights in the new section Gods and Men.

A special event is dedicated Wednesday June 6 from 22.30, to the Romanian artist often compared with Marcel Dushamp, Mircea Cantor. For the first time, eight of his video works will be screened in Romania, outside the space they were initially conceived for – the gallery. The artist will attend the screening, giving the audience in Cluj a chance to meet him and take part in discussions.

Two exhibitions will open on Wednesday. At 18.00 at Piano Cazola Gallery it’s the opening of a major Artificial Intelligence retrospective with Chris Baker’s amazing sketches. This exhibition is part of the graphic concept ordered by Stanley Kubrick in 1995 for the projected Artificial Intelligence. Steven Spielberg, who continued the collaboration with Chris Baker, finally made the film in the memory of Kubrick.

At 19. 30 at TIFF Art ( Art Museum) Helmut Stürmer will open a  special exhibition  along with the 40th event screening of Stone Wedding (directed by Dan Pița, Mircea Veroiu). After years of Excellency as art director, photographies and elements of set design will be presented to the Transilvania IFF’s audience.

A special screening  of Gone Wild will take place at 20.30 at Cinema Arta in the presence of director Dan Curean. Developed in the framework of Discovery Campus MasterSchool, the documentary shows the story of the last horses from Danube Delta. Also at 20.30 at Casa de Cultură a Studenților we recommend Sacrifice, a historical drama directed by Chen Kaige, film included in the program Focus China.

Due to the interest around national films, Romanian Days, one of our most expected sections will start one day earlier than usual, on June 6. At Odeon Cineplex the film buffs can see, among other, Chasing Rainbows (d.Dan Chișu), 3 Days Till Christmas (d. Radu Gabrea and Killing Time, directed by Florin Piersic Jr.