30.07.2020 11:47
A series of exhibitions will be available free of charge in several spaces around Cluj for the duration of the festival. 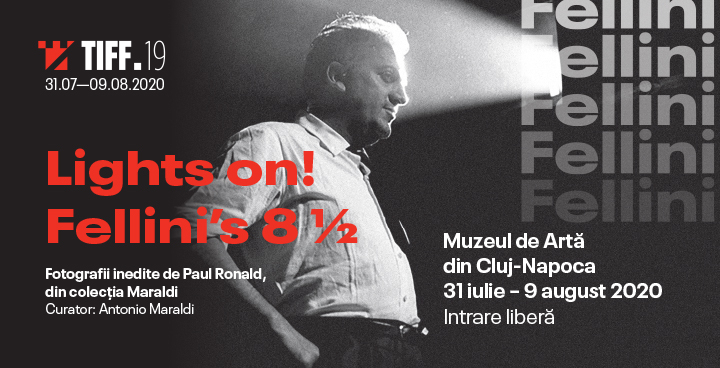 Fellini’s extraordinary world comes to life once again through the lens of Paul Ronald, who recorded the filming of 8 ½. As the official set photographer, he took thousands of pictures of the master, Fellini himself, of the unparalleled Marcello Mastroianni, of the seductive Claudia Cardinale, are all captured in this behind-the-scenes look at cinema.

The exhibit is part of the Close-Up Federico Fellini section which TIFF dedicates to the Italian auteur and is organized by Centro Cinema Città di Cesena, Regione Emilia Romagna, in collaboration with TIFF, and in partnership with the Italian Chamber of Commerce for Romania and the Honorary Italian Consulate in Cluj-Napoca.

A selection of works from the campaign launched at the beginning of the COVID-19 pandemic by the Cluj Cultural Center and the Romanian Health Observatory to mobilize Romanian artists to create works which reflect important themes of the day: togetherness, responsibility, heroes.

Photographs by Erik Messori and Remus Țiplea on the beginning of the COVID-19 pandemic in Romania and Italy. While places and people differ, the stories of isolation are strikingly similar.

A Journey in Dem’s World

This interactive cultural project invites audiences to discover Romania through the stories of Dem Demestrescu, the illustrator who marked graphic arts between 1930–1970.

A visual incursion in Bucharest’s massive yet still largely unknown modernist art deco heritage. The exhibition is the starting point for a broader national Romanian deco platform and for a debate space for architects and creative communities in the country.

Twelve Romanian photographers provide a generous incursion into the emerging field in the country.

The People. The City. The Festival

The archive of the Transilvania International Film Festival reveals special moments from the most recent editions: audience members, guests, and festival crew.