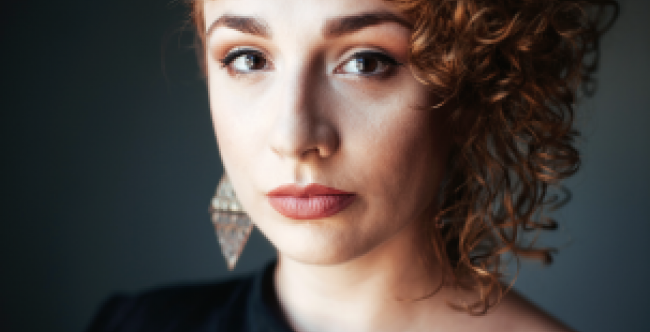 In 2009, Silva Helena Schmidt graduated the “Babes Bolyai” University of Cluj-Napoca Romania, and in 2011 she got her Master’s degree diploma in the Art of Acting from the same university. She attended Master’s degree classes in Contact Dance Improvisation, Noh Theatre, The Language of Shakespeare, The Creative Actor of Jaques Lecoq and The Power of Actor- Ivana Chubbuck.

She was an actress of the North Theatre of Satu-Mare and the National Theatre of Iasi, and she played in performances staged by Mihai Măniuțiu, Claudiu Goga, Gábor Tompa.

In Bucharest, she was a voice-over for Realitatea TV Channel, she collaborated with Andreea Tănăsescu and Andrei Măjeri on theatre and dance, experimental projects and performances at Bulandra Theatre and WASP.

Current projects: acting in “Organic” staged by Andrei Măjeri at the National Theatre of Bucharest. She is part of “Serpentine Series Project”, the creative platform which produced the short film called PERSONA, in which Silva starred. She also played an episodic role in “Las Fierbinţi” sitcom. She worked with director Virgil Nicolăescu on the music video of “Happy”.