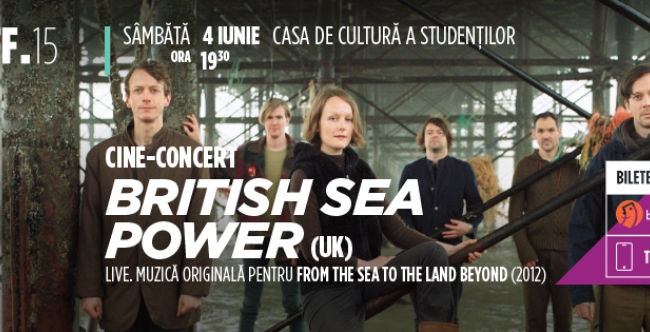 British Sea Power have played atop the Great Wall Of China, at the CERN atom-research labs and beside the diplodocus skeleton at London’s Natural History Museum. They’ve played on ships at sea, deep inside Cornish slate mines.The intensity and invention of the band’s shows made them Time Out magazine’s Live Band Of The Year in 2004. BSP have toured giant American stadiums with old friends The Killers, Interpol, The Flaming Lips, The Strokes and Pulp.

The band emerged in 2000 in East Sussex, England and had since made a prolific career launching 9 albums, among which a couple of full soundtracks for documentaries, starting with The Decline of British Sea Power in 2003 and launching their last album, Sea of Brass, in 2015. Their passion for nature, cartography, bird watching and the sea, their distinct lyrics and sound made them the perfect choice for scoring the documentary From the Sea to the Land Beyond.

From the Sea to the Land Beyond is a mesmerizing documentary by director Penny Woolcock about a century in the history of Britain’s coastline, a poetic experience made from archive footage from the National Archive BFI. Given that there is no dialogue in the film, and no sound from the scenes themselves (as much of the footage pre-dates necessary advances in technology), the musical soundtrack matters even more than usual. The songs manage to enable and illuminate the film’s story-telling about the changes in British society from 1901 to the present day, life during two wars and peace time, the age of industrialization, the rise of the suffragettes, the rise and decline of the fishing industry.