The Show of Shows - Weekend at the Castle 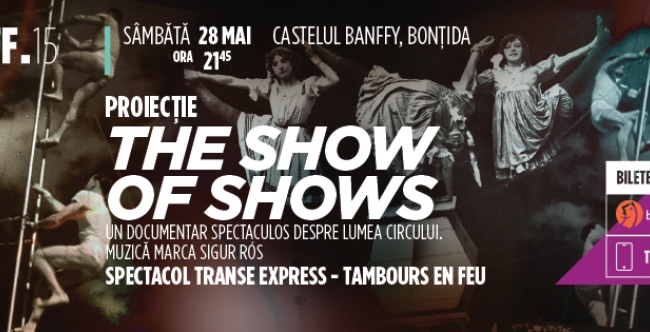 The Show of Shows, by Benedikt Erlingsson | With an original score by Georg Holm and Orri Páll Dýrason of Sigur Rós, in collaboration with Hilmar Örn Hilmarsson and Kjartan Dagur Holm

A captivating and often disquieting documentary about a century of vaudeville, circus shows, fairs and carnivals. The Show of Shows offers new archive footage with clowns, dancers, daring acrobats, freak shows and cruel scenes of animal and children exploitation in a fascinating portrait of a popular world in the 19th and early 20th centuries, according to „The Guardian”.

The touching score of the film was composed by bass player Georg Holm and drummer Orri Páll Dýrason, both members of the famous Icelandic band Sigur Rós, in collaboration with composer Hilmar Örn Hilmarsson and guitar player Kjartan Dagur Hólm. Sigur Rós will come to Cluj, in July, for a live concert during Electric Castle Festival.

The Show of Shows is directed by Benedikt Erlingsson, one of Iceland's most beloved theater directors, and was made in collaboration with the National Fairground Archive of Sheffield Univeristy. The director's feature debut, Of Horses and Men, played in TIFF 2014.

From 8:30 PM, a surprise show will introduce the audience in the fascinating atmosphere of the documentary.