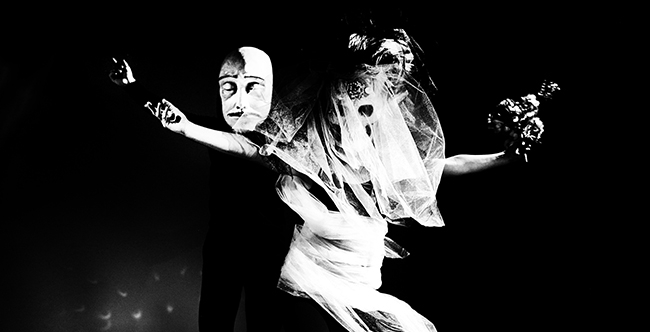 On Thursday, 6th of June, starting from 9:30 pm, the Auăleu theater will prezent: Miorița (The Ewe Lamb), a stunning adaptation of the most significant piece of literature in terms of Romanian folklore. In this pastoral ballad spread in over a thousand different versions, the plot centers three shepherds among one of them learns from an enchanted ewe that the two others plan to kill him in order to take his possessions. The latest adaptation takes the ballad outside the realm folk songs and poetry and places the creation at the intersection between two mediums: the contemporary music and the mask theatre. Comprising musicians from the black metal dimension – such as Sol Faur, a former member of Negură Bunget, currently in Dordeduh – opera percussionists and professional actors from the independent theatre collective Auăleu, from Timişoara, the Mioriţa project adapts one of the lesser known versions of the ballad originating from Banat. In this version, the victim of the two shepherds undertakes a revolutionary attitude before being killed, instead of the lament. However, the death still represents the climax of this story along with the connection with the “bride of the world”, where death is seen as the reincorporation of the individual within the nature.

A magical performance that will give you goosebumps – at Casa TIFF, where the entrance is free of charge.