The Autobiography of Nicolae Ceauşescu 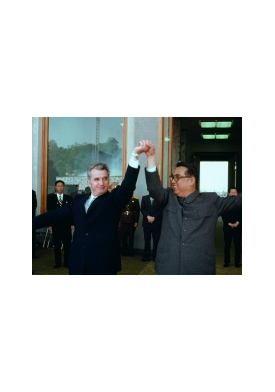 After all, a dictator is simply an artist who is able to fully put into practice his egotism. It is a mere question of aesthetic level, whether he turns out to be Baudelaire or Bolintineanu, Louis XVI or Nicolae Ceauşescu. (Andrei Ujică)

From a formal point of view, The Autobiography of Nicolae Ceauşescu proves that it is possible to only use existing images to yield films focused on recent history, yet with an epic vein similar to that of the historical fiction cinema – such as, most notably, the ample period pieces dedicated by American cinema to the Vietnam War generation.

This is an eminently syntactic endeavor, where montage plays a twofold part: mise-en-scene, as it builds scenes that do not exist as such in the rushes, and classical editing, connecting scenes together. We may be witnessing the birth of a new film genre.