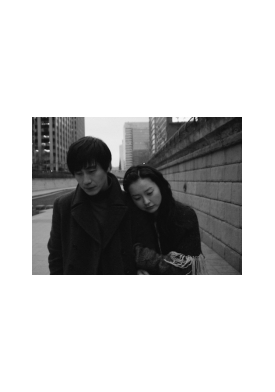 I walk and walk the streets of Seoul. The buildings torn down. Erected anew. Simulacra in the name of ‘restoration’. False history. Fake modernity. Political gestures unfurled in front of them, like a live theater. The season of politics here is winter. Ihad to make this film during a cold winter. The wind blows from the right. The riot police lined up in the streets. Random interrogation of pedestrians. Protests approaching suicides. Some were burned to death during a demonstration. The former president killed himself. I wanted to capture that Seoul, gagged and bound. Was it Jean-Luc Godard who said, make your cinema political, instead of making a political film? I, along with my camera, my crew and cast, wandered around in Seoul. The movie’s „dead time” is the real time of Korea, the time in which our despair dwells. Goethe, Frankfurt 1774. Dostoevsky, St. Petersburg 1848. Seoul, 2009. Dead times. No more deaths. (Jung Sung-il)