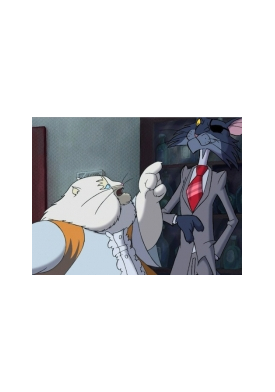 Cat Catcher, the robot dog pacified all civilized cats at the end of the original Cat City film (1986) and as a result of this cats and mice live a peaceful co-existence. How can you carry on from this point? There remained an unpacified cat tribe in the Pafrican Jungle. They learn about the fate of their kinscats from a busy bee journalist mouse called Stanley who is captured by blood-mice and hunter cats at the end of his successful expedition to find Livingstone in the jungle. The jungle cats evoke the first deputy chief of hell, Moloch and they set out with him to put the world back to order. Whether they succeed in this or not remains unanswered until one watches CATcher – Cat City 2.