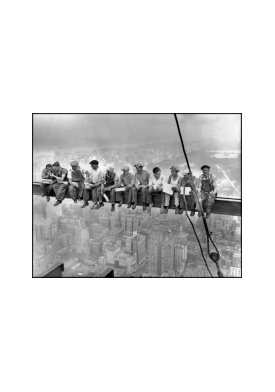 Eleven ironworkers eat their lunch sitting on an iron beam, their feet are dangling in the air high above New York, with Central Park and a foggy Manhattan in the depths below them. Everybody knows the photograph "Lunch atop a Skyscraper," taken in 1932. The image became an icon of the Great Depression, but its backgrounds remain mysterious: neither the 11 men nor the photographer have been definitively identified. When director Sean O Cualain stumbled upon a copy of the picture in a pub in a small Irish hamlet, with a note that two of the men came from that village, he decided to delve into the history of the photo.