The pier of Apolonovka (Germany) 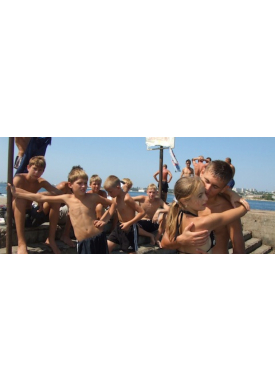 The people on the pier of Sevastopol Bay are a symbol of the inextricable dilemma in which the city finds itself: too impoverished for splendour and glory, and much too alive for the scrap-heap.

People such as handsome 14-year-old Push, who finds mopeds much cooler than girl, or shy 13-year-old Nastja, still mourning her lost first love, spend their summer together on the pier. Even 80-year-old Galina still has a few tears to spare for the bass voice of her erstwhile lover, but not before she completes her morning swim at Apolonovka‘s run-down beach.

A summer on Sevastopol‘s pier, a place made fascinating by the encounter between parallel worlds.

Official Program - The pier of Apolonovka