Gake no ue no Ponyo (Japan) 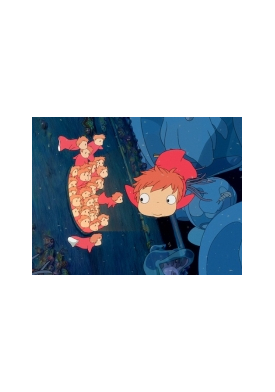 Memorable characters, imaginative visuals and irresistible charm make this latest masterpiece from the visionary Miyazaki an unforgettable film-going experience. Ponyo (voiced by Noah Cyrus) is a mischievous and adventurous little goldfish, who drifts away from the undersea home she shares with her father, the wizard Fujimoto (voiced by Liam Neeson), and hundreds of little sisters. Far from her home, she meets Sosuke (voiced by Frankie Jonas), a 5-year-old boy who lives by the sea with his mother Lisa (voiced by Tina Fey). Sosuke gently cares for his new pet and quickly wins Ponyo’s heart. Ponyo’s father, desperate for his daughter to return to their undersea home, uses his magic to bring her back, much to Ponyo’s dismay. But Ponyo, ever the stubborn little goldfish, longs to return to her special friend. She magically transforms herself into a little girl and finds her way back to Sosuke’s house  where she and her friend embark on a series of adventures. But Ponyo’s desire to be human upsets the delicate balance of nature and triggers a gigantic storm. Only Ponyo’s mother, a beautiful sea goddess (voiced by Cate Blanchett), can restore nature’s balance and perhaps make Ponyo’s dreams come true.