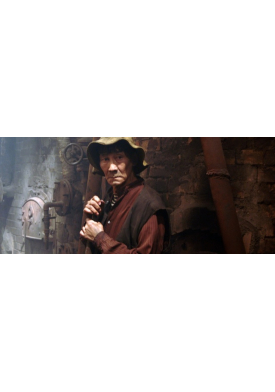 The stoker is a veteran of the Afghan war: a retired major and hero of the USSR who spends his life in an old boiler room, writing a book and shovelling coal into the boiler. Every now and then, an old veteran friend pays him a visit, to burn something other than coal. These things seem to be human bodies, but the stoker doesn't seem to care. His friend tells him they were bad people. His beautiful daughter, who stays in her father’s flat, comes to the boiler room only to ask for money. The only people really interested in the stoker’s work and writings are two little girls who visit and ask curious questions. The boiler is a symbol present in all houses, and fire destroys everything in the end.