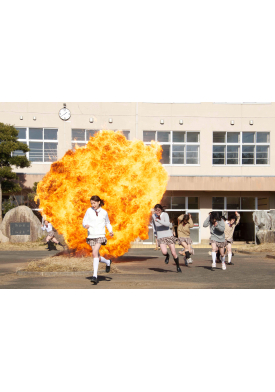 Two buses filled with jubilant schoolgirls are rolling down a country road, and Mitsuko is the only one who is sitting calmly, writing poetry. When she bends down to pick up a pencil dropped by her friend, something unthinkable happens: both vehicles are cut in half by an invisible entity. Standing amidst dozens of severed bodies, the young girl is suddenly being chased by a homicidal wind whose clutches she barely escapes. When she finally makes it back to school, Mitsuko learns something truly shocking.