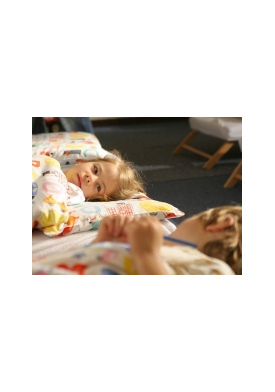 A family film, a children’s horror movie, a mature romance and a fairytale about Little Red Riding Hood. Though at first sight these genres are wildly divergent, they top off Maria Procházková’s visually innovative Who’s Afraid of the Wolf fantastically. In it, the director of Shark in the Head returns to the poetics of her successful graduate short film Příušnice.

The main hero of the story is named Terezka. She loves the fairytale Little Red Riding Hood, she has caring parents and a best friend from nursery named Šimon. She could easily live happily like this until the end of her days... if this weren’t reality. Suddenly the earth starts to slip from beneath Terezka’s feet, her mother and eventually all the grown-ups she knows start acting strangely, and the only one who is able to give her counsel is her friend Šimon. He’s clear on everything. Terezka’s mother has been switched with an alien being. All it needs is a single prick with a fork, a wound that will heal over immediately, and the proof will be there for all to see. Terezka thus has a big adventure ahead of her. In trying to save her real mother, she will face a much more dangerous and perhaps hungry wolf.

Official Program - Who's afraid of the Wolf (8+)