Bardi Johannsson: "What makes me smile is dark humour" 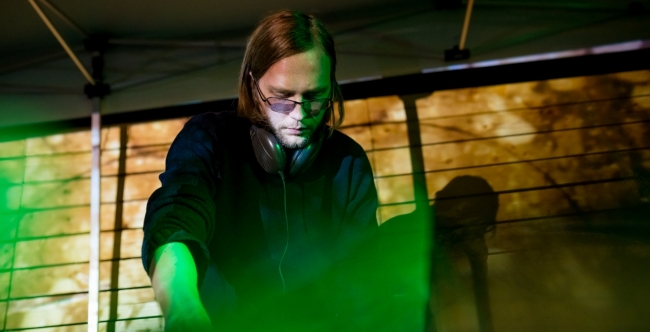 Bardi Johannsson is not a person known for expressing feelings with his face. However, he does an extraordinary job in expressing them through music. A day after the exceptional Haxan performance at the Banffy Castle in Bonțida we asked him about the experience. During the interview Bardi almost smiled. Twice. On the inside.

You smile very little. Why is that?

I believe that smiling deforms your face. The face is normal like that (he shows his usual straight face). But when you smile it stretches (he fakes a smile). I don’t like that. (Straight face again)

Yet you do smile sometimes, one of our photographers almost caught you on the red carpet on day one. So what makes you smile, when you do?

What makes me smile is dark humor. And farts.

You are a musician, yet at one point you planned to become a lawyer. How come?

My grandfather was a lawyer. I spent a lot of time in his house. There was no internet, and I had to read a lot. But most of his „library” consisted in files and indictments from his lawsuits. I have learned a lot of things about human nature, by reading those. A lot of real, insane, twisted true stories. I guess it inspired me to become a lawyer at the moment.

You were saying, yesterday, on facebook, that you would wear the black cape at the Castle Concert. Does that mean something special?

No. It is just a black cape. One of the two that I have, and which I wear on special occasions

So what was special about last night?

A lot of things. When I listened to the music last night, I probably did it in a different way from the rest of the people there. I wrote this piece ten years ago and I was very attentive at the details, because somehow it seemed new to me.

Was it because of the way Simona  and the orchestra performed last night?

Simona did with Haxan something I’ve never seen before. She was extremely precise in synchronizing the music to the film. Whenever something has happened on the screen, she knew how to direct the musicians into doing the perfect thing. Her music was never late. It was always on time. It gave a great feeling. It was something new, and something very hard to do.

What inspired you to write the music for Haxan? What was the moment that made you say “I will do this”?

The French studio I was working with proposed me a movie for which to write the music. Yet I didn’t like it. So I told them that I cannot do it. Then they gave me a list of ten other movies. Haxan was among them. I liked it a lot, so I said “This is it”. The first time, the music was played by two violins, percution and an electric system. Afterwards I have adapted it for an orchestra.

What feeling did the place (Banffy Castle) give you?

I felt I want to move and live there. We have no castles in Iceland. It is my dream to live in a castle when I grow old.

I’ve asked this question to a dozen members of the audience at Haxan last night “what is your greatest fear”. They gave me some straightforward answers. I guess it’s your turn to answer.

Bardi Johannsson is an Icelandic composer and producer. He is mostly known for his work with Bang Gang and his side-project with Lady & Bird, an androgynous duo with the talented artist Keren Ann. Bardi has also written numerous soundtracks for films, documentaries and TV series. He has written music for the National Theater of Iceland and Centre Dramatique D’Orleans and numerous shorts, documentaries and feature films - his soundtrack for Oskar Jonasson’s Reykjavik Rotterdam (2009) winning Best Original Film Score at the Icelandic Edda Film Awards.