Cannes 2016: Romania’s Conquest of the Croisette 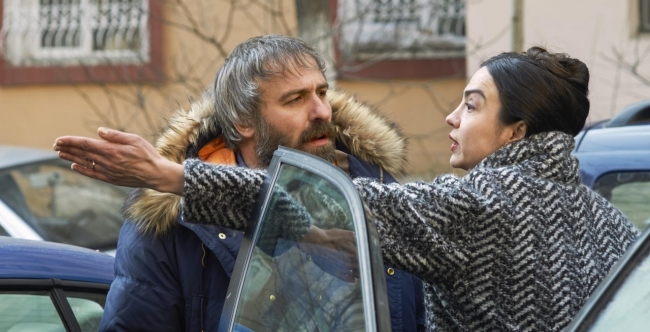 Perhaps the most surprising thing about the unusually high number of Romanian films in Cannes this year is that no one thought it especially unusual. We’ve come to expect one Romanian film in each major festival, so having two in competition, especially when those two were by Cristi Puiu and Cristian Mungiu, seemed natural. After all, we’ve grown accustomed to the fact that at least one of the standard three French films in competition will be lousy (anyone care to remember last year’sMarguerite et Julien? And why is it I’ve already forgotten the title of this year’s film by Nicole Garcia?), so having two stand-out Romanians doesn’t seem such a stretch. Yet it wasn’t just this starry duo: Marin Ade’s critical smash Toni Erdmannis a Romanian co-production, largely shot in Bucharest. Wait, there’s more.

Un Certain Regard boasted Bogdan Mirica’s feature debut Câini / Dogs, screening here at TIFF, while Cătălin Rotaru and Gabi Virginia Şarga’s 4:15 p.m. Sfârşitul Lumii / 4:15 p.m. The End of the World was in the shorts competition, and Alexandru Badea’s short Toate fluviile curg în mare / All Rivers Run to the Sea was in Cinéfondation. Rounding out this triumphal list, Album in Semaine de la Critique is a Turkish-French-Romanian co-production, and there were no less than eight Romanian titles screening in the market.

Given constant concerns about the paucity of production funding, combined with the still scandalously low number of cinemas in the country as well as the lack of interest in local product shown by the majority of the population, and it does seem like something of a miracle.

I’m not going to enter into the whys or wherefores – I’m generally better at analyzing films than analyzing trends – but it is important to mention that a fertile crop in 2016 doesn’t mean 2017 will see the same quality of output, and the problems mentioned above remain.

I didn’t see Câini at Cannes since I knew I could catch up with it in Cluj, but I want to briefly address the striking difference between how Romania is seen in the films of Puiu (Sieranevada) and Mungiu (Bacalaureat / Graduation), and how the country looks through the foreign eyes of Marin Ade. In his perceptive review of Sieranevada, Dan Fainaru wrote that audiences “will find themselves swept away by this family reunion which offers not only a masterful portrait of the contemporary Romanian middle-class but also a whole set of smart, perceptive reflections on the relativity of truth, on the failings of memory, the interpretation of history, the significance of religion and much more.” The fundamentals of Puiu’s vision haven’t changed: the nation remains a place where animosity lies bubbling just under the surface, and memory is rarely a mirror reflection of truth.

In Mungiu’s world, strong wills have little compunction in forcing through their selfish desires, and he’s once again chosen a shabby Soviet-era concrete housing estate as the setting for his ethically stymied characters. Toni Erdmann presents a different picture: Ade’s Bucharest is one of Europeanized businesses and sleek corporate offices. There are chic watering holes (mostly populated by foreigners) and open-minded company players (actress Ingrid Bisu is delightfully fun in her small role). It’s refreshing to find a more “normalized” Romania than the one usually seen in both international and domestic products, neither exoticized nor weighed down by internal angst. But then again, some may argue it’s not up to a foreigner to shine a blistering spotlight on the skeletons in Romania’s closet. Unless, of course, it’s Saturday Night Live.

A brief note for TIFF regulars: our very own, irreplaceable Ozana Oancea has a small role in Toni Erdmann. Her name isn’t in the imdb cast listing, but when I saw her on screen, I almost felt like I was back home in Cluj.