15.04.2016 14:55
A series of notable documentaries which explore the different visions that the directors have about their jobs and which pay tribute to cinema as an art form will play during Transilvania IFF within a special section titled Cinema, Mon Amour 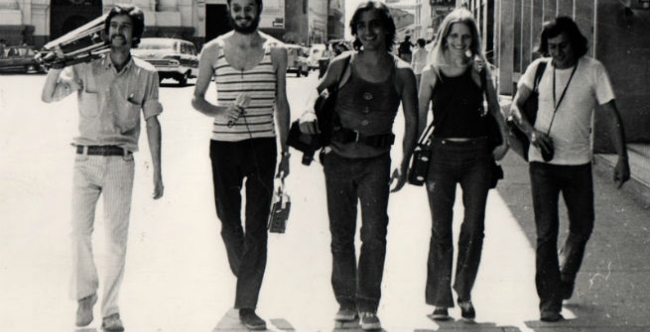 The more than ten films in the program talk about cinema from multiple perspectives, some downright unexpected: from cult movies and cinema trends to famous directors or actors; from extras to fans who are ready to do anything for their favorite hero; from tricks of the trade and power games on set, to the cinema theatres and film archives. And, last but not least, some even talk about the ways in which, sometimes, film affects real life.

The impact of film on the lives of ordinary people is studied in Once Upon a Dream: A Journey to the Last Spaghetti Western (d. Tonislav Hristov, present at TIFF 2014 with Soul Food Stories), a modern fairy tale about the hopes of the inhabitants of Spain's desert town of Tabernas, where Lawrence of Arabia was filmed, hopes nourished by the Hollywood dream. The Wolfpack, the debut film of Crystal Moselle (Grand Jury Prize at Sundance 2015), tells the incredible story of six brothers who lived 14 years isolated from society in an apartment in Manhattan and whose only reality is the collection of movies that they faithfully reproduce within their four walls.

Hitchcock / Truffaut (d. Kent Jones) premiered at Cannes 2015 and is based on the original recording of the remarkable meeting between François Truffaut and Alfred Hitchcock in 1962 and the subsequent book of conversations about the art of filmmakeing, a truly cinematic bible. The testimonies of cinephile directors such as Martin Scorsese, David Fincher or Wes Anderson support the  impact of Truffaut's book and Hitchcock's influence on current directors. I Do not Belong Anywhere: The Cinema of Chantal Akerman (d. Marianne Lambert) analyzes, based on over 40 films, the origins of the cinematic language of the renowned late Belgian director.

Built from recordings filmed by the actress herself with a16mm camera, diary entries, letters and archive footage, and narrated in Swedish by Alicia Vikander, the documentary Ingrid Bergman: In Her Own Words (d. Stig Björkman) explores the complex personality of the Swedish actress. The fascinating Helmut Berger, Actor (d. Andreas Horvath) is a disturbingly intimate portrait of the difficult personality of the actor Helmut Berger (71), former muse and lover of Luchino Visconti. The incredible Doomed Beauty (d. Helena Třeštíková) follows the tragic story of the Czech actress Lida Baarova, known for her beauty and her love affair with Joseph Goebbels.

A Flickering Truth, directed by Pietra Brettkelly, is a disturbing documentary about hardcore cinephiles who restored thousands of hours of film material from the cinematic past of Afghanistan after the Taliban regime trauma. Fury of The Demon is a captivating investigation that starts in the footsteps of the 1897's eponymous film by Georges Méliès, nicknamed "the deadliest movie ever made." Legend says that watching it makes viewers become violent.

50 Days in The Desert (d. Fabrizio Maltese) documents the 7 week shooting in the Sahara desert of The White Nights (d. Joachim Lafosse, Best Director at San Sebastian 2015) and examines the dynamics of interpersonal relations created on set and the manipulative role of the director. In his latest documentary, the epic and touching It All Started at the End, cult director Luis Ospina turns his camera toward the past, toward his Cali roots, the Colombian artists collective who revolutionized art, cinema and literature, while the country was overtaken by narco-terrorism and guerrilla warfare in the 70s and 80s.

The film that gives the title of this section, Cinema, Mon Amour (d. Alexander Belc), brings together the back stories of the state abandoned Romanian cinemas, via its protagonist, Victor Purice, a true Don Quixote who fought every day to save the Dacia Panoramic cinema in Piatra Neamt.