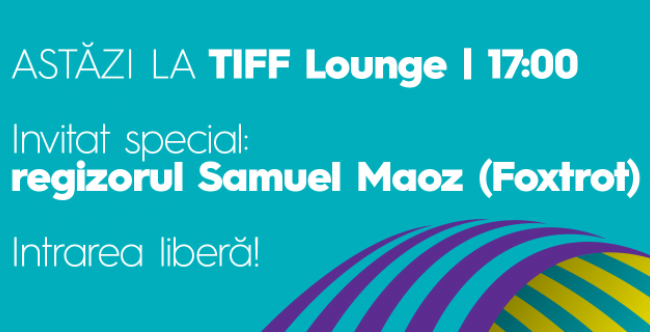 Sunday, at 5 PM, journalist Mihnea Măruță and Mihai Chirilov, the artistic director of the festival, have him over for dialogue in the special venue in Unirii Square of Cluj-Napoca.

The filmmaker who earned his international reputation for his feature debut Lebanon (2009), the first Israeli production to be awarded with the Golden Lion in Venice, returned to TIFF with Foxtrot, the film that opened this year's edition with a sold out screening. The controversial story of the Israeli - Palestinian conflict received the Jury's Prize at the Venice International Film Festival and won no less than 8 Ophir awards at the “Israeli Oscars”. The film's success scandalized the Israeli authorities, who applauded the American Academy's decision to not include the title on the nominee’s shortlist for Best foreign movie.

Samuel Maoz was born in 1962 in Tel Aviv, and the experience in the war in Liban, as a tank soldier, inspired him in making his first film. He studied cinema at the Art University of Tel Aviv, where he graduated from in 1987, while between 1990 and 1992 directed five episodes of the TV series 008 And His Battle Against The Enemies Of The Human Race.