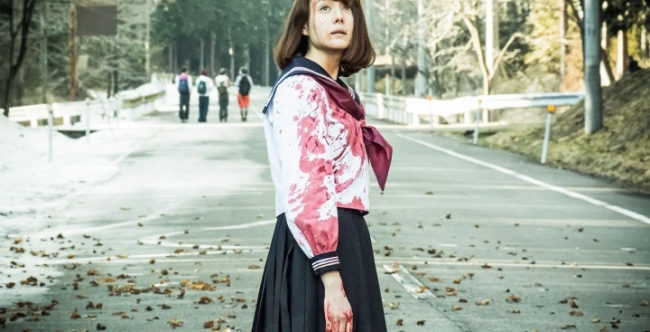 With a career spanning over three decades and 46 films, Sion Sono is one of the most prolific contemporary directors. The filmmaker was previously included in the No Limit section of TIFF 2012 with Himizu.

"Sion Sono is the hero of the most explosive retrospective in TIFF history. A challenging and impossibly inventive iconoclast, this enfant terrible of contemporary Japanese cinema passes with breathtaking ease from one genre to another and pulls the rug from under your feet just when you thought you've caught him. His films are very diverse, although he churns them out one after the other in rapid succession, and they all breathe grace, horror, contradiction and excess through every pore. But few have talked about love the way he did in his masterpiece Love Exposure. A free spirit par excellence, Sion Sono will feel very much at home at TIFF 15,” explains TIFF artistic director Mihai Chirilov.

Sion Sono (54) made his debut as a poet at 17, and as a feature filmmaker at 28, with Bicycle Sights (1990), a surprise hit in Japan. It is a known fact that he prefers – more often than not – to write, direct, produce and create the soundtracks for his films all by himself. He addresses different genres with ease, cleverly sabotaging their conventions, while maintaining the alienation of the individual in modern society as a solid thematic core that runs throughout his work. His creations have played in hundreds of festivals and have won awards in Berlin, Karlovy Vary, and Sundance.

Love Exposure, Sion Sono's most awarded film, recipient, among others, of the FIPRESCI Prize at Berlinale 2008, brought him the status of cult director. The nearly four hour long epic journey is a religious satire centered on the rebellious son of a fanatic priest who decides to commit as many capital sins as possible. The British Film Institute placed it among the 10 best films of Japanese cinema. Guilty of Romance premiered at Cannes in 2011 and is another grotesque masterpiece, a film noir that explores the relationship between desire and guilt: a young wife who can't find satisfaction in her marriage takes refuge in her masochistic fantasies, working as a prostitute.

A significant title for the lovers of grindhouse cinema, Tag (2015) is a journey into the deepest substrata of the imagination, a fantasy for adults in which high school students are tracked and slaughtered by supernatural forces. Suicide Club (2001), the film that proved Sono's ability to simultaneously dip into horror, crime, psychological thriller, and black comedy, talks about the wave of suicides in Japan and takes to extreme the idea of the failed modern society. The first scene, in which 54 girls commit mass suicide and trigger a bloodbath, is by now iconic.

Noriko's Dinner Table (2005), another landmark of the Japanese horror cinema, selected in 12 festivals and awarded at Karlovy Vary, explores current social issues in Japan, such as the conflict between generations, social alienation, suicide, and the volatility of identity in the age of the Internet.

Shinjuku Swan (2015), his highest box office success, inspired by a Manga series, follows the transformation of a young pimp from the biggest "red" district in Tokyo.

The Virgin Psychics (2015), an adaptation of yet another Manga comic strip, is a wacky comedy replete with sexual innuendo and populated by teens with telepathic powers.

An exception in his filmography, Love & Peace (2015) is a touching surreal musical comedy that lampoons classic family films and celebrates the Kaiju monsters genre.

The Land of Hope (2012), inspired by the consequences of the Fukushima explosion, is a touching drama about two families separated by a nuclear disaster.

Be Sure to Share (2009), another exception from the J-horror genre, tackles the theme of the fragile relationship between a son and his father, overshadowed by the discovery of a terminal illness.