01.06.2016 17:49
Lead: Fabrizio Maltese has been doing still photography for almost a decade, but his portfolio boasts a wide-ranging interest beyond film. 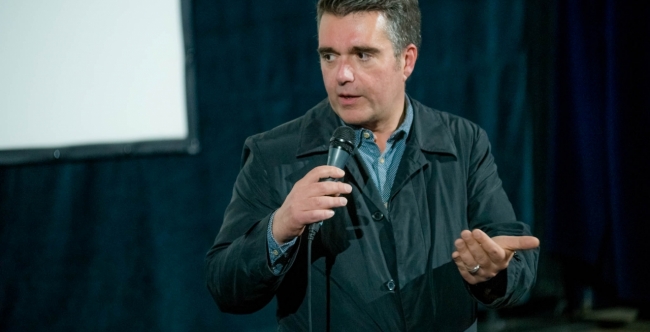 When Fabrizio has the time, he tackles with equal passion fashion, travel, and architecture. In 2015, he followed Belgian film director Joachim Lafosse, with whom he had collaborated on his previous film Our Children (2012), on the Moroccan set of his ensemble piece The White Knights. The resulting work of his 50-day stay in Erfoud is the documentary 50 Days in the Desert, one of the most ambitious portraits Fabrizio Maltese has ever done. Maltese answered some of our questions at Casa TIFF, where to our surprise the photographer sat still for a couple of shots.

How do you feel about being the subject and not the photographer?

Very uncomfortable, it’s almost a horrible experience to be on the other side of the camera (Laughs). Now I understand my subjects who are sometimes scared to be portrayed by me. Normally, I try to make the experience really easy for them. I just set up the light, prepare the set and let them convey their own picture.

I do, but it is a different way of controlling — subtler, gentler. I do not want to impose on the subjects, I just create an environment where they can express themselves without feeling oppressed or obliged to do something. But at the end, what surfaces is still my way of seeing the subject.

What specific part of your wide-ranging work do you feel most attached to?

Lately, I’ve been working mostly on film production and film stills. Because of time constraints, I have to put aside many of my passions (such as architecture photography), but I’m happy that my work on a film set allows me to do portraits, which are a significant part of my work. Mostly, I am at ease when I have to deal with famous faces who are conscious of the image they project. At the same time, it is a challenge to photograph a face already widely known and draw out something different from their image.

You recently transitioned to film directing, but your love of portraits can be seen in this documentary. What does a moving portrait allow you to express that a still one does not?

First of all, crossing the barrier towards film was my way of experimenting with cinematography, something I have always felt compelled to try. During the 25-26 films I did the still photography for, I witnessed the work of famous cinematographers. That made me want to expand towards this medium. Nowadays, with digital, it is easy to cross the path from still photography to cinematography. The concept of how the light impresses the digital sensor is the same. My second motivation was that in a still portrait the boundaries that I have to work within are limiting. To create a story in a still portrait, I need to add things to it, but in a moving portrait, the palette I can use is bigger. I have time, I have movement, and that enriches the story I want to tell. With 50 Days in the Desert, I also wanted to have a narrative backdrop to my story. In this case, the backdrop is Joachim Lafosse’s film, and the portrait I am making is, as Lafosse asked of me, an artist’s vision of another artist at work.

Based on your long experience on a movie set, how much do you think a director should control his actors and everything that happens on set? This is a question that is brought up a lot in 50 Days in the Desert.

If we are talking in general about the role of the director on set, I think the director must have control in a way. There are many ways of expressing this control. For sure, Joachim Lafosse manages to control his actors differently than any other directors I have worked with and I think his method is also quite peculiar. In a way, I think it is also similar to a certain extent to what I do when I take a portrait. I like to set a framework, the light, the space, and then let the actor or the subject do whatever they think they are free to do. But they are limited by my choices, my decisions. And Joachim does more or less the same thing, in a more sophisticated and pungent way. He chooses his actors not only for their performances, but for their character, for what they really are as human beings. Then he puts them in a box. He is like a puppeteer. He watches his toys playing in the environment he created. And sometimes he adds something to create an almost chemical reaction.

What captured your interest the most on the set of The White Knights?

The apparent chaos – the fact that, for example, it rained on set. Then, there was the fact that the script was being rewritten every day and even overnight, and that decisions taken in the evening were discussed again in the morning. Sometimes, the crew was ready to shoot according the schedule, but Joachim still struggled with finding the balance of the scene, so he would start rewriting or rehearsing with the actors. This is a very dangerous process in terms of production costs, but it is also extremely fascinating, because this is how a film really is born. For me, it was even more complicated because I had to do two different things – still photography and shooting my own documentary. I ran back and forth and it was kind of schizophrenic, but it was also very intense because of that. But I am really happy I did it, because it was the project that made me think really seriously about filmmaking.