The impact of Transilvania IFF on Cluj's economy: 7.5 Million Euros

19.03.2016 23:20
A study by the Babes-Bolyai University Business School estimates the impact of Transilvania IFF on the local economy at 7.5 million EUR. 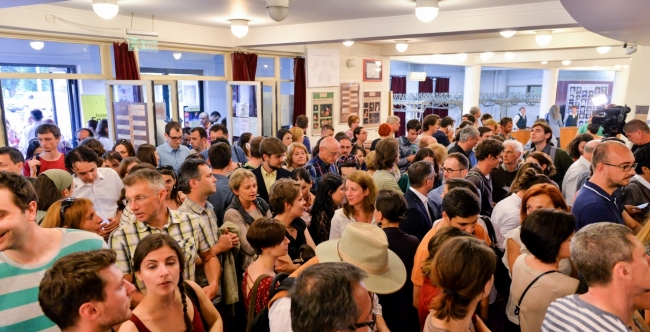 The Business School of the Babes-Bolyai University analyzed the funds invested in the local economy for the festival, the local taxes generated by activities connected to the festival, but also the money spent by the participants. Over 85% of the respondents feel that Transilvania International Film Festival is the most representative cultural event of Cluj, contributing to higher levels of education among the general public, but also to the development of local infrastructure.

“TIFF has set new standards for organizing events at a professional level and has opened up new spaces, contributing to the development of the cultural infrastructure of Cluj. The festival has generated significant effects in the community through education and involvement in social projects. It was already known that TIFF has become, in its 15 years of existence, the most important cultural brand of the city and one of the most valued and respected film festivals in the world. But we were curious to see the effects that TIFF effects has on the city from a business perspective, seeing the large number of Romanian and foreign guests and tourists who annually come to the festival,” says Tudor Giurgiu, TIFF President.

"This study allows us to objectively evaluate the added value that the festival brings to the city it grew up, the city it considers a true home. The UBB study confirms that TIFF is a local brand and a priority cultural project for the city, and the figures show the economic development that the festival generates: tourists, revenues, and visibility for all our partners and the local community in general,” says Cristian Hordilă, TIFF manager.

The document shows that the share of Cluj residents among the total number of participants of TIFF is between 81% and 85%, with the remainder made up of tourists from other counties or abroad. According to the survey, tourists are mainly people with above-average income, 48% of them choosing to stay at hotels and hostels for 3 or 4 nights at an average price of 94.8 lei per night. During their stay in Cluj, 70% of tourists watch at least 2 movies a day, and 40% watch at least three movies. There is also time for shopping (8% of visitors) or going out (57.9%) — which means that 66% of the tourists attracted to Cluj by the festival are also a source of revenue for pubs or shops in the city. They spend an average of 57.6 lei per person for meals, plus the cost of movie tickets and transport.

Additionally, about 20% of the tourists are new audiences who come to Cluj for the first time, specifically for TIFF.

The direct proceeds coming from the visitors are rounded up with the amounts spent by residents. The Cluj people attend about 5 days of the festival, namely 1.42 events per day. The study shows that 80% of them spend an additional average of 49.5 lei for goods and services as a result of participating in an event of the festival.

The study has also measured the participants' perceptions about the impact of the festival on the local economy and cultural scene. Thus, most respondents believe that TIFF attracts investments to the city, encourages local people to develop new economic activities, and brings the issue of infrastructure to the top of the local authorities’ agenda.

As far as the local cultural scene is concerned, the study shows that in addition to offering alternative leisure activities, TIFF increases the level of education and culture, contributing to the cultural life of Cluj and facilitating communication and the development of new relationships on the social level.

Over 50% of respondents said that TIFF is a cultural icon for Cluj. An overwhelming proportion, 90%, have a good or very good impression about the festival.

Most TIFF participants are in the 26-35 age group, with above-average income, and higher education (about 45% of the total). Viewers under 25 represent 27% of the festival audience, and those between 36 and 45 years, about 15% of the total. 86% of TIFF viewers are people who have an university degree.

The research was carried out with logistical and technical support from UPC Romania and Samsung Romania, on a representative sample of over 1,000 people, including 828 TIFF participants who, in the 6 months before TIFF are Cluj-Napoca permanent residents (including students), and 178 participants from other cities and from abroad. The study was conducted by a team of members of the Hospitality Services department of the Faculty of Business, coordinated by assoc. Prof. Dr. Adina Negrusa and assoc. Prof. Dr. Valentin Toader.

"We worked two years on this study, between 2014 and 2015, because we wanted to check the validity of the results from one edition to the next, and to provide a more accurate and precise analysis. The research confirms the economic impact of the festival and the value that it brings to the community, but also the positive reception of TIFF among the public with a high level of education,” said Adina Negrusa.

During the 2015 edition, TIFF continued its growth and set a new record of spectators, with 73,000 tickets sold, 110,000 participants (including free events, masterclasses, workshops, exhibitions, concerts, and parties), 850 professional guests from the film world, 400 screenings, and 223 films from 60 countries. The team now prepares TIFF 15, which will take place in Cluj-Napoca from May 27 to June 5, 2016.

Transilvania International Film Festival (May 27 – June 5 2016) is organized by Romanian Film Promotion and the Association for Film and Urban Culture with the support of the Romanian Film Centre, the Ministry of Culture and the Town Hall of Cluj-Napoca.