Manolo Cruz: “I wanted to talk about love” 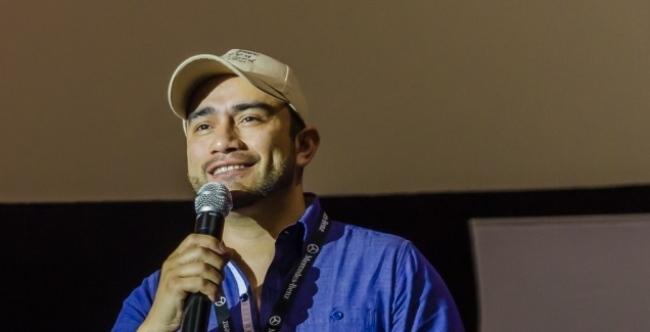 Manolo Cruz has written and performed in the movie Between Sea and Land. He moved critics and audiences with the story of a mother and her physically disabled son.

Why did you make the switch from directing to acting?

I started playing in theatre plays and movies when I was six, but in Columbia they only make movies about violence, drugs, and that sort of things. I wanted to talk about love, and not any kind of love, but a mother’s love towards her son. Owning things is not important in life. Love is. I made the movie from my soul, with love and God's blessing. The whole movie speaks about love, it is the result of love. The public's feeling after watching the movie is a big desire to love. Everywhere in the world where I have been with the movie, people came to me with tears in their eyes and thanked me after screenings.

What is the Columbian people's approach to the disabled?

It's not only a Columbian point of view, but generally, people try to avoid the disabled. By doing this movie, I have discovered in the souls of the disabled people their desire to live and to do what everyone else does.

Did you live in a floating house?

I didn't exactly live in it. The people who lived in these houses only wanted to be with their loved ones. I would really enjoy living there. I slept a night there, right after filming. The crew left and I stayed there. I put up a hammock. It was phenomenal. I completely disconnected from everything. I stopped hearing the wind and everything else, I was only hearing my breath.

This is your first script, you wrote it from your heart, do you see yourself writing another one in the near future? Do you feel like telling another story?

I received a lot of offers, as a director and as an actor. If I won't be given a script that can contribute with something valuable to humanity, I will have to write it. Cannes has given me a four-month residency in order to write a script. I also have an offer from a Hollywood producer. I'm not interested in doing something commercial. My next movie will be even more profound. I want people to gain something from my movies. (Ion Indolean)

Manolo Cruz is an actor, writer, and director, well-known for his movies Between Sea and Land, Miraculous (2008) and Talion (2015). Talion was screened in the Supernova section of  TIFF 2016 and won the audience award for the best performance at Sundance.