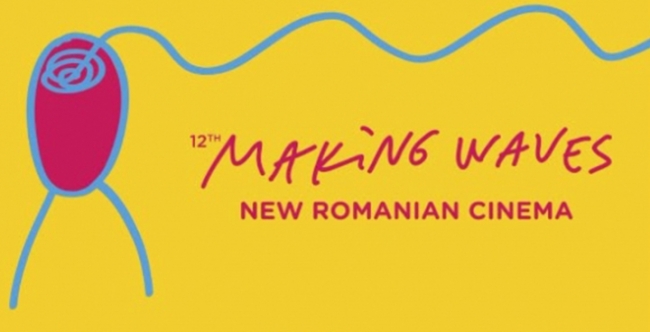 The 12th edition of Making Waves: New Romanian Cinema, New York’s longstanding Romanian Film Festival, ended on December 7 with remarkable success. The festival, initiated and organized by the Romanian Film Initiative, in partnership with BAMcinématek and Jacob Burns Film Center, has once again brought the most recent Romanian cinema productions to U.S. audiences.

Eager audiences obliged with full houses at the Jacob Burns Film Center, one of the traditional partners of Making Waves. The festival opened with 6.9 on the Richter Scale (d. Nae Caranfil), sold out one day in advance, and further programmed The Fixer (d. Adrian Sitaru), Romania’s submission for the Oscars, Ana, Mon Amour (d. Călin Peter Netzer), That Trip We Took With Dad (d. Anca Miruna Lăzărescu) as well as the documentaries Cabbage, Potatoes and Other Demons (d. Șerban Georgescu) and The Last Kalderash (d. Cosmin Bumbuț and Elena Stancu), and the short Written/Unwritten (d. Adrian Silișteanu), awarded at TIFF and nominated at the European Film Awards. Screened as a closing film, Breaking News was followed by a long Q&A with director Iulia Rugină: "I find it very important that Making Waves connects Romanian filmmakers with the US audience. It is a very necessary link and a dialogue that changes perceptions on both sides. I think I had one of the most beautiful Q&A sessions after my screening. The way in which this highly educated audience responded to my work is something that ultimately helps me, as a filmmaker, see myself from the outside, with other eyes, geographically and culturally removed, and understand something of it. "

The BAMcinématek, first-time partner of Making Waves, was host to more animated meetings. One of the program’s highlight was the 3-title retrospective of Anca Damian’s work (Crulic, The Magic Mountain and In Perfect Health), particularly appreciated by reputed New York photographer Nan Goldin and writer Andrei Codrescu, who attended the festival. The young directors selection included the main winner at TIFF 2016 Dogs (d. Bogdan Mirică), Two Lottery Tickets (d. Paul Negoescu) and Meda or The Not So Bright Side Of Things (d. Emanuel Pârvu), with both Negoescu and Pârvu in attendance.

US distributors and programmers got together with Romanian filmmakers at Making Waves, in the framework of Film Industry Talks, a platform moderated by director and fARAD Documentary Film Festival curator Mona Nicoară and Making Waves president, Corina Șuteu. Jonathan Howell (Big World Pictures – U.S. theatrical distributor of Aferim!, Victoria, and most recently, Scarred Hearts), Rodrigo Brandao and Nicholas Kemp (Kino Lorber, which secured the theatrical distribution of Tuesday, After Christmas) and Fumiko Takagi (Criterion Collection, with the DVD release of Cristian Mungiu’s most recent films in preparation) are just some of the promoters of Romanian film in America. Tribeca Film Festival director Frederic Boyer, along with Brian Ackerman, director of programming of the Jacob Burns Film Center, and independent curator Irena Kovarova, were also part of the transnational dialogue.

Leading support for the 12th edition of Making Waves is provided by The Trust for Mutual Understanding, the Filmmakers Union of Romania, and Blue Heron Foundation, along with generous contributions from the festival’s community of grassroots supporters. Film Industry Talks is co-funded by the Administration of the National Cultural Fund of Romania, with the support of Lark Play Development Center.