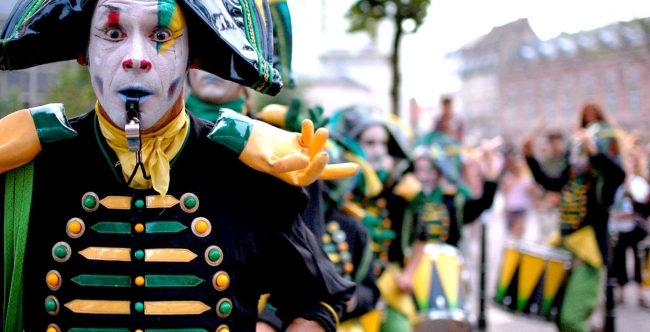 An impressive live show by British Sea Power, described by "The Sunday Times" as "the best band in Britain", is one of the not to be missed special events of the 15th edition of the Transilvania International Film Festival (May 27 - June 5). Cinepiano returns for the second time in Cluj, while France's Transe Express brings daring trapeze artists to the heart of the city and drum parades to Bonţida.

Famed British indie rock band British Sea Power, cherished for the spectacular stage presence and choice of unconventional concert spaces will accompany From the Sea to the Land Beyond (by Penny Woolcock, 2012), an excellent documentary about a century in the life of the British ports. The event will take place Saturday, June 4, from 7 PM, at the Students' Culture House. A poetic and revealing experience, the film contains lots of archive footage and documents the changes that have taken place in the British society since 1902, including two wars and times of peace, the transition to industrialization and the struggle for women's rights.

British Sea Power, founded in the early 2000s and currently consisting of six members, won the appreciation of legendary artists such as Lou Reed, David Bowie, Jarvis Cocker and Radiohead, and their concerts were held on the Great Wall of China, at the CERN particle accelerator, in a dinosaurs exhibition at the Natural History Museum, on a ship at sea and in a stone mine. The band was crowned "the live band of 2004" by the "Time Out" magazine. They toured the US, playing giant stadiums, at the invitation of such bands as The Killers, Interpol, The Strokes and Pulp. Tickets are available on http://www.biletmaster.ro.

After its success at TIFF 2014, when hundreds of children, with their parents, enjoyed Tony Berchmans' original music, the artist returns to Cinema "Florin Piersic" on Wednesday, June 1, within EducaTIFF, with the show Cinepiano. The Brazilian composer and pianist recreates the magic of cinema going from the early 20th century, when the silent images on the screen were accompanied by live music, sounds and noises, played at the piano and other instruments. This time around, Berchmans' music will accompany the short films of the classic silent comedy masters.