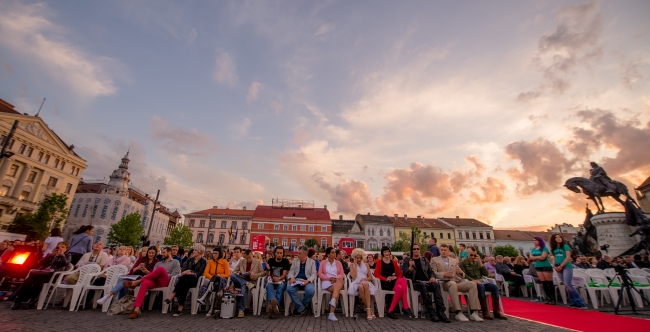 After an anniversary edition which set a new audience record, Transilvania International Film Festival will return for its 16th edition between 2 and 11 of June 2017. This year, more than 79.000 spectators watched the 248 films, the total number of participants exceeding 120.000. After the festival, the films continued to travel the country, with the TIFF Caravan, reaching over 15 cities.

In its 15 years of existence, the largest film festival in Romania changed the face of Cluj, contributing massively to its transformation into one of the most dynamic cities in the country. Over the years, TIFF has brought to Cluj thousands of foreign guests, while those who visited the city this year declared themselves delighted with the atmosphere, the people and the festival. Their opinions can be watched and heard in a special clip: http://bit.ly/2crfR7s

"TIFF is the first major cultural event that put Cluj on the map and in its 15 years of existence it has shaped an important audience interested in film, media and visual arts. The volunteers and the students who have passed through the educational programs of TIFF employed the experience they gained during the festival in their own projects. Due to TIFF, the entire profile of the city has changed fundamentally – today, Cluj aspires to become a major center of film production, has two faculties focused on cinema / media / TV and lots of cultural events", said Tudor Giurgiu, the President of the Festival.

The impact of TIFF is not just cultural and educational. A study conducted by the Faculty of Business at the University Babes-Bolyai in Cluj-Napoca between 2014 and 2015, estimated the economic impact of the festival on the city to 7.5 million Euros. "Culture is an asset, an investment with returns that cannot be measured only in pragmatic terms. The TIFF impact study was conducted after 14 editions. It is only now that we know what we invested in, because now we can determine a major economic impact. In culture, as in education and health, investments should always be long term", said Corina Şuteu, the Minister of Culture, for AperiTIFF, the newspaper of the festival.