21.05.2016 18:32
Romanian-British artists Anton and Damian Groves produce the TIFF visual identity for the third year in a row. 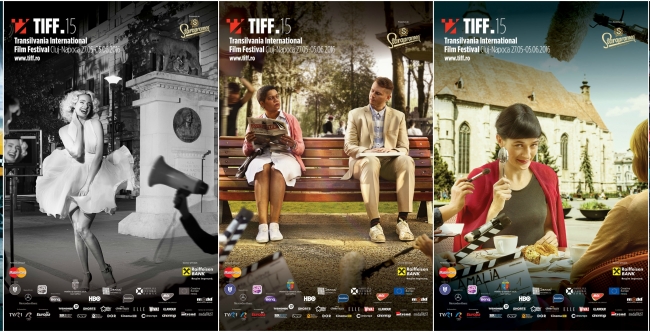 Romanian-British artists Anton and Damian Groves created the five official teasers for the 2016 Transilvania International Film Festival starting from a concept by Bloom Branding & Design Studio. The main characters in the teasers are played by non-professional artists selected during a casting session organized in Cluj-Napoca.

“The idea behind this year’s visual identity came from our graphic artist Andrei Pastuhov and Bloom Studio creative Domnița Georgescu, who proposed that we re-make famous shots from classic Hollywood movies with regular town folk. TIFF played with this concept in past years, when iconic movie shots were injected with typical Transylvanian spices,” says TIFF Artistic Di-rector Mihai Chirilov.

“The novelty behind this anniversary edition, which is also spearheading the city’s strategy for being granted European Cultural Capital status for the year 2021, consists of faithfully re-enacting iconic shots using the actual backdrops and inhabitants of Cluj. Each of the five posters is associated with a teaser in which the city itself becomes a set where an ordinary citizen of Cluj is briefly turned into a recognizable movie character. The posters retain some back stage ele-ments: microphones, flood lights, clappers, loudspeakers, dollies, etc. This also works as a met-aphor for the way in which TIFF transforms the city of Cluj-Napoca during the ten days of the festival,” Chirilov adds.

Each of the five characters have an added Transylvanian twist: Forrest Gump becomes Pădurea Ghimpe (featuring Rareș Brănescu and Dolores Bădulescu), Amélie becomes Amalia (as played by Andrea Cadar), Terminator becomes Terminatul (Gheorghe Iftime), Marilyn Monroe from The Seven Year Itch becomes Mariska (Andra Buicu, a student with the Cluj Theater and Television School, together with Son of Saul’s Levente Molnár, a denizen of Cluj himself), while Radu Bereș plays Robert de Niro in Taxi Driver, that is, Taxidermistul, in the Transylvanian version.

The festival teasers are produced by Libra Film and Studioset, with Marius Mihai Apopei as Di-rector of Photography. The photographer for the posters is Manole Sava of Greenmind Studio.  The Unirii Square, the 21 December 1989 Boulevard, the Calvaria Bridge, the Central Park and the Heroes Boulevard were used as settings for the 2016 TIFF visuals.