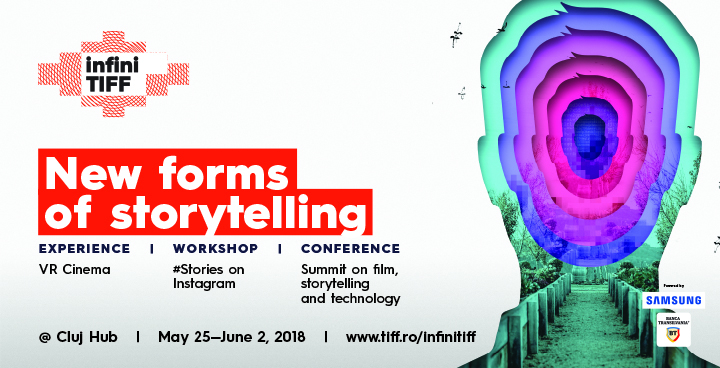 In a special space organized in ClujHub, audiences will have a chance to discover an exciting selection of VR, live cinema, and loop cinema experiences.

infiniTIFF Summit, a conference on new trends at the intersection of film, technology, and storytelling, as well as #Stories on Instagram, a workshop on narrative forms emerging on the new social platform, are both among this year’s novelties. 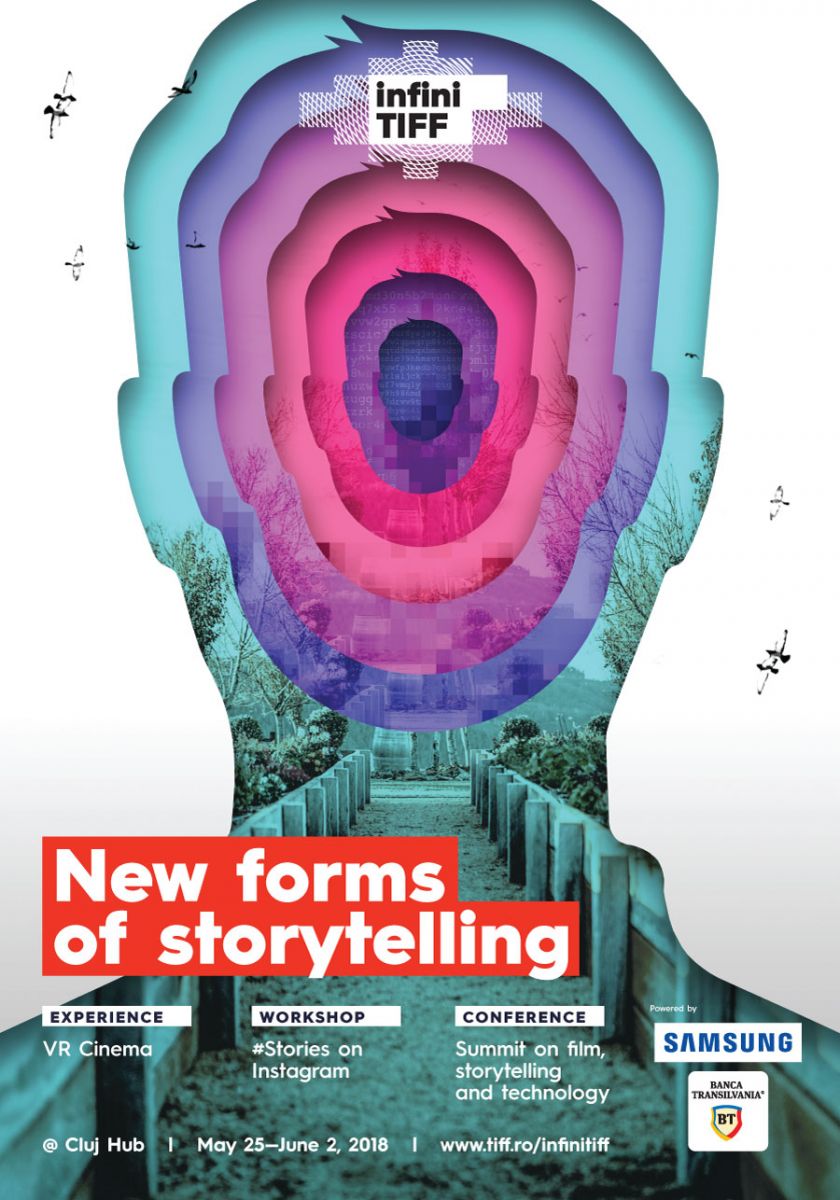 infiniTIFF is once again supported by Samsung Romania through a life-altering ecosystem of products including VR Gear and the new Samsung Galaxy S9 și S9+, smartphones that have revolutionized our communication and sharing. “Technology is now part of our lives. Nowadays we can compose, enjoy, and share beautiful shots with a mere smartphone, a Gear 360, or some VR eyepieces. VR allows us to explore worlds and go wherever we choose to. We can experiment with the newest filmic content, with various games and apps, and have a front row, direct experience of other people’s stories,” said Simona Panait, Head of Corporate Marketing & Communications for South-East Europe.

For the second year in a row, infiniTIFF brings together an interdisciplinary community of film lovers, creatives, tech experts, and influencers bent on breaching the conventional boundaries of storytelling, in a diverse and complex professional get-together which has fostering creativity and collaboration.

“The second edition of infiniTIFF continues to explore new forms of audio-visual content at the intersection of film, storytelling, and technology, side by side with more traditional cinematic forms presented at TIFF. Audiences can join in on this interdisciplinary innovation ride in a triple role: as spectators in VR, YouTube, and live cinema programs; as trainees in the #Stories on Instagram workshop; and as participants in an international conference in the field,” said infiniTIFF curator Erwin M. Schmidt (Berlin), founder of the innovative  Cinemathon new film technologies company (www.cinemathon.international) and of a co-working space for film and tech entrepreneurs and creators, The FilmTech Office (www.filmtechoffice.com).

What does the common evolution of storytelling and technology look like, and what is the full potential of this evolutionary fusion? infiniTIFF Summit (May 30) brings together international experts, film industry professionals, creatives, and techies to explore these  issues. The newest forms, means, distribution and financial models for storytelling will be discussed by European special guests Ricardo J. Mendez (Berlin), Samsung NEXT Technical Director; Sten Saluveer (Tallinn), founder and CEO of the Storytek creative accelerator; Prof. Thomas Langhanki (Berlin), founder of Experimental Game; directors Katarzyna Kifert and Dawid Marcinkowski (Warsaw and London) the Kissinger Twins duo; and Irina Albita (London), Co-Founder of Big Couch.

The popular social media platform Instagram provides an ever-increasing array of tools that have drawn the attention of brands and influencers. In a first for a major festival, the infiniTIFF workshop this year will focus on the narrative potential of the platform.

Between May 26-29, workshop participants will learn secrets used by social media gurus under the guidance of the Polish Kissinger Twins, a multiple-award-winning interactive visual storytelling creative partnership. The stories created on Samsung Galaxy S9  during the workshop will be presented at the infiniTIFF Summit and will be published on all TIFF platforms.

Film professionals, designers, technology creatives, script and copy-writers, programmers, visual artists, animators, game enthusiasts, etc., can apply to participate in the workshop here. The online application form must be submitted by May 11. The 15 participants will be selected based on their letter of intent and their level of experience in audio-visual and social media content.