Weekend at the Castle: circus, witches and live Icelandic music 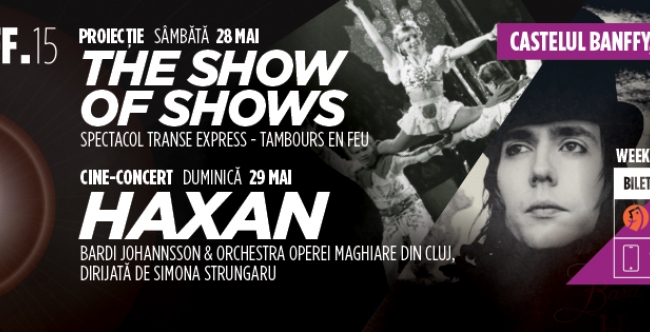 A highly controversial 1920s silent horror with a live score by a renowned Icelandic artist and an orchestra and a fascinating documentary about the world of the circus with music by members of Sigur Rós are among the surprises offered in the Weekend at the Castle program of Transilvania International Film Festival (May 27 – June 5).

In the daytime, the first weekend of the festival will turn the Banffy Castle in Bonțida into a playground and a space for creative workshops and children shows. At night, the castle and its environs will host screenings and concerts.

On Saturday, May 28, at 9:45 PM, a captivating and often disquieting documentary about a century of vaudeville, circus shows, fairs and carnivals will play on the outdoor screen in the courtyard of the castle. The Show of Shows weaves archival footage of clowns, dancers, daring acrobats, freak shows and cruel scenes of animal and children exploitation in a fascinating portrait of a lost world that reached the height of its popularity in the late 19th and early 20th centuries.

The Show of Shows is directed by Benedikt Erlingsson, one of Iceland's most beloved theater directors, and was made in collaboration with the National Fairground Archive of Sheffield University. The director's feature debut, Of Horses and Men, played in Transilvania IFF 2014. The touching score of The Show of Shows was composed by bass player Georg Holm and drummer Orri Páll Dýrason, both members of the famous Icelandic band Sigur Rós, in collaboration with composer Hilmar Örn Hilmarsson and guitar player Kjartan Dagur Hólm. (Sigur Rós are slated to come to Cluj in July, for a live concert during the Electric Castle Festival.) A surprise show will introduce the audience into the fascinating atmosphere of the documentary starting with 8:30 PM.

Icelandic is also the music that will accompany on Sunday, May 29, from 9:45 PM, the ciné-concert Häxan: Witchcraft Through the Ages (1922). Forbidden in many countries due to its depictions of devil worshiping and nudity, Häxan is the most expensive Scandinavian silent film ever made. Danish director Benjamin Christensen, who also plays Satan in the film, found some of his inspiration in Malleus Maleficarum, a 15th century Inquisition handbook. The Gothic atmosphere of the Castle will offer the perfect backdrop for an original score by Icelandic artist Bardi Johansson, played live by a symphonic orchestra conducted by Simona Strungaru.

Bardi Johannsson, who became famous under the stage name of Bang Gang, has long been acclaimed as one of Iceland’s most intriguing creative enigmas. He is a composer, singer-songwriter, multi-instrumentalist, designer, presenter, satirist, and fine purveyor of surreal humour. Together with JB Dunckel from AIR, he is behind the Starwalker project. Bardi has composed symphonic music, film scores (Eleven Men Out, Reykjavík-Rotterdam – winner of the Best Score award at Edda Film Awards, Would You Rather, De toutes nos forces), and music for the theatre, as well as the score of iconic commercials. His solo or collaborative work spans 12 albums. His score for Häxan was first played in 2005 by the National Icelandic Symphonic Orchestra.

In 2012, the artist accompanied the film during a screening at Centre Pompidou in Paris. The symphonic orchestra that will play the score during TIFF will be conducted by Simona Strungaru, a pianist, conductor, orchestrator, and film score composer who graduated from the Amsterdam Conservatory under the renowned professor Jan Wijn. In 2010, she conducted the world premiere of the opera S.A.L.O., by Michael Karr, a production of Prime Foundation and Grand Theater Groningen. Additionally, she conducted the Banat Philharmonic from Timisoara in a one of a kind collaboration with Cobzality symphonic and Green Orchestra, for a Loredana live concert and for a URMA MTV Unplugged performance.

Monday, May 30, from 10:00 PM, Bardi Johannsson will also be at Casa TIFF with a DJ set based on film images and personal compositions.

The tickets for each of the two special events are 15 lei and can be purchased in advance on biletmaster.ro.

You can follow the Transilvania IFF events on: https://www.facebook.com/TransilvaniaIFF/events