Cine-concert „Faust” with Jean-François Zygel, a master of improvisation 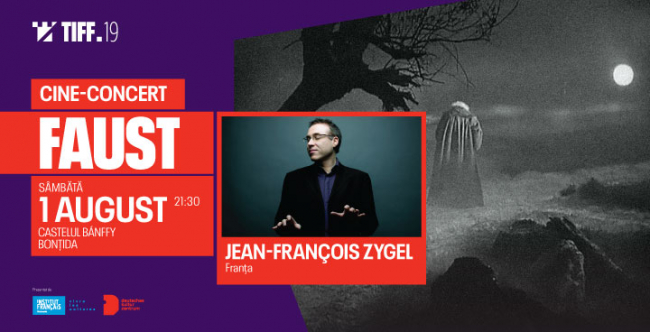 One of the world’s best musicians working with silent cinema comes to Cluj-Napoca on Saturday, August 1st, at 9:30 PM, at the Banffy Castle in Bonțida: A master of improvisation, Jean-François Zygel will accompany live F.W.Murnau’s 1926 masterpiece Faust (1926). “At TIFF I will accompany the incredible film made by the genius Murnau for the 12th time. Shadow and light, tears and lightning, a terrifying fight between good and evil, chaos and revelations, innocence and perdition — the expressive force and intensity of the imagery will overwhelm everyone, I am sure, as it has every time I accompanied this film,” said Zygel.

A singular figure among musicians, pianist and composer Zygel  founded the piano improvisations classes at the Conservatoire de Paris and has worked to popularize classical music on humor and passion-filled radio and TV shows across France. Zygel has collaborated with major figures such as Michel Portal, Ibrahim Maalouf, Bobby McFerrin, Antoine Hervé, or Sly Johnson. His most recent album, L'Alchimiste, was released by Sony. The ciné-concert is organized in partnership with the French Institute.