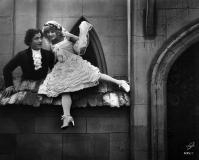 Film fans will enjoy a spectacular screening of the silent film The puppet, accompanied live by Struggle-Orchester. Struggle-Orchester is composed of six musicians and their conductor Karl Koch. Each image of the film will be accompanied live by the original music, special created for Ernst Lubitsch’s film. This special performance is organised in partnership with the German Cultural Centre from Cluj.

The puppet tells the magical story of a girl-shy young man who, in order to inherit his father's money, must get married. This frightening prospect finds an elegant solution when he is betrothed to a puppet-maker's lifelike, quasi-robotic doll. What the young groom doesn't realize is that he's accidentally taken the puppet-maker's real-life daughter as his bride! Complications follow in this charming silent film of women-as-objects and objects-as-women, full of the witty humor that made Lubitsch so popular during his time.

HERE you can purchase your tickets.