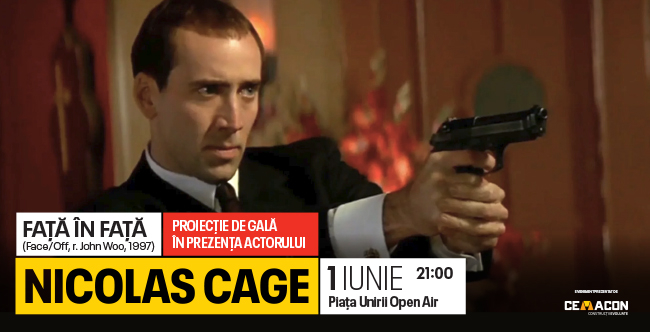 FACE OFF screening from Unirii Square will be moved according to the following program:

8:30 PM, Florin Piersic – second screening due to audience special request. Nicholas Cage intends to arrive at the end of the screening to greet the public

Following the above changes, films already in the program will be rescheduled as follows:

Oscar winner actor, director and producer Nicolas Cage is one of the special guest of Transilvania IFF 2019. Saturday, June, 1, the American superstar will be present in Piata Unirii Open Air where he will be awarded Transilvania Trophy for the Contribution to the World Cinema. Nicolas Cage will latter join the public for the special screening of Face/OFF .

Launched in 1997, Face/OFF earned critical acclaim for its acting performances with Cage playing a terrorist and John Travolta in his role as a FBI agent. The film was a great commercial success all over the world and received an Oscar nomination for Sound Effects Editing.