Black Comedy, Family Drama, and Eroticism in the Competition 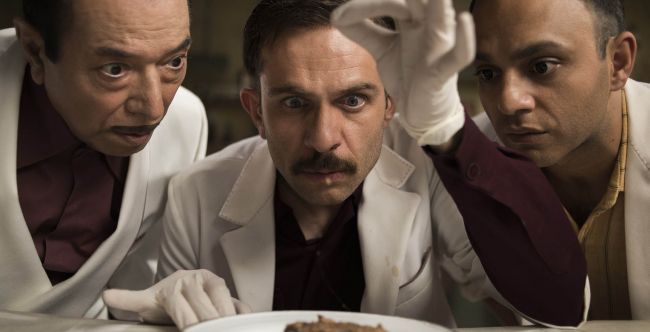 Dedicated to first-time or sophomore feature film directors, the TIFF 2020 Official Competition features 12 provocative stories and just as many original approaches competing for the Transilvania Trophy. Eight of them are feature film debuts for directors who are just starting out or have already made a name for themselves as series or documentary film directors. TIFF audiences will have the chance to see the entire selection in Cluj-Napoca between July 31 - August 9.

From Colombia, the country where the TIFF jury’s prize went last year for Alejandro Landes’s Monos, comes Nicolás Rincón Gille’s troubling debut Tantas almas, about a desperate father trying to recover the bodies of his two sons felled by civil war cruelty. Another desperate father is at the heart of Polish director Bartosz Kruhlik’s Supernova, “a vibrant story oscillating between drama, thriller and a disaster” (Film New Europe) about an apparently quiet community struck by tragedy out of the blue, spectacularly choreographed and filmed exclusively along a country road.

Belgian director Tim Mielants, who authored the third season of Peaky Blinders, makes his big screen debut with the Karlovy Vary direction award-winner Patrick, o black tragicomedy placed in a naturist camp about the unmooring of a silent man following the sudden death of his father. An existential crisis awaits the protagonist of Rialto, whose family life begins to unravel as he finds consolation in the arms of a 19 year-old hustler in the second film of Irish director Peter Mackie Burns, which premiered in Venice.

How many sacrifices would you be willing to make for your family — this is the question that troubles Ida, the hero of Wildlife, the first film from Danish director Jeanette Nordahl, which premiered this year in Berlin. The teenager discovers that the relatives she lives with following the death of her mother in a car crash are involved in illegal activities. Babyteeth, the debut film from Australian director Shannon Murphy, is also captivating and surprising: two parents discover that their cancer-stricken 16 year-old daughter (Eliza Scanlen of HBO’s Sharp Objects) fell in love with a drug dealer. Presented in the Venice competition, the film brought Toby Wallace the Marcello Mastroianni award for best young actor.

Love knows no limits in Jumbo, French director Zoé Wittock’s daring debut about a young woman who develops a bizarre passion for a carousel in the amusement park where she works. The film premiered at Sundance and was included in the Berlinale Generations selection. Fidelity, Nigina Sayfullaeva’s psychological drama about identity and intimacy was controversial in Russia, as it courageously deals the important roles that sex and power play in a marriage.

Bizarre and delicious, the black comedy A Hairy Tale is an homage to surrealist playwrights signed by Amir Homayoun Ghanizadeh, one of the most important theater directors in Iran, who makes his filmmaking debut. Zheng Lu Xinyuan’s The Cloud in Her Room is a semi-experimental black and white meditation on love, family, and belonging which received the grand prize at Rotterdam.

Resigned after his a string of business failures, the protagonist of Zacharias Mavroeidis’s Defunct returns to his grandfather’s home trying to carry on the memory of the old war vet, but the time he spends with his war buddies reveals unexpected family secrets. A series of innocent lies build an obstacle course in Sister, the story of two girls who survive tough times with their mother in a small Bulgarian town. This self-proclaimed “confession of love to those who live a seemingly unnoticeable life”  is the second film from Svetla Tsotsorkova, who came previously to TIFF with Thirst.