Cine-concert Bestia/The Polish Dancer: The only Polish film starring Pola Negri to survive to this day 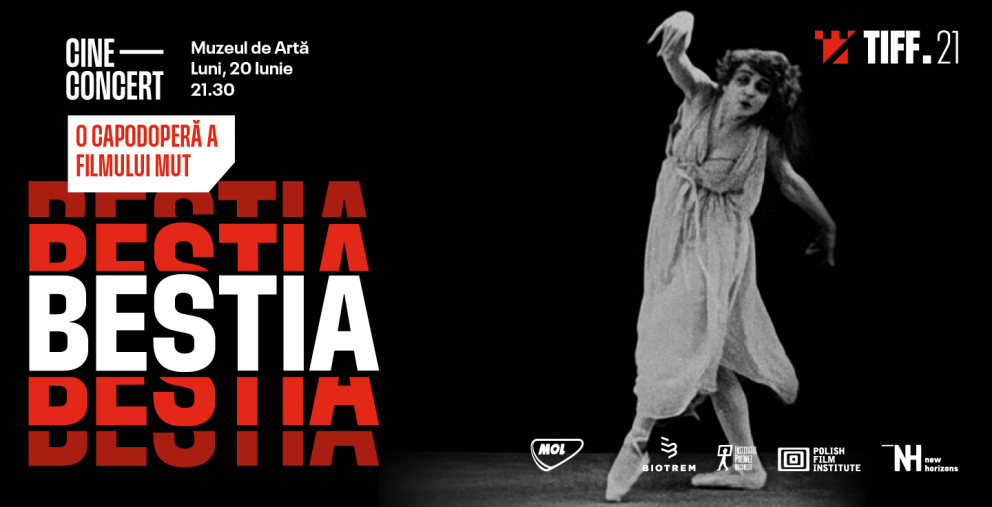 Bestia / The Polish Dancer (1917), director Aleksander Hertz's masterpiece of silent cinema, starring Pola Negri in the title role, premieres in Romania in a digitally restored version at the 21st Transilvania International Film Festival. The only Polish production featuring the famous actress to survive to this day will be accompanied live by the music of Grammy award-winning composer and pianist Włodek Pawlik. A unique opportunity to explore the beginnings of Polish cinema, Cine-concert Bestia, scheduled to take place in Cluj-Napoca on June 20, will be presented at TIFF with the support of the Polish Institute in Bucharest.

Tickets are on sale online: https://tiff.eventbook.ro/music/bilete-tiff-2022-cine-concert-bestia

At the beginning of the 20th century, a true star was born on the Warsaw theatre stage. Known worldwide as Pola Negri, Barbara Apolonia Chałupiec made her big screen debut at the age of 17 as a young dancer in Slave of Sin (1914). She went on to become one of the favourite actresses of director Aleksander Hertz, who noticed her in a musical and gave her leading roles in Wife (1915) and Students (1916).

Films from her early career were destroyed in whole or in part during World War II. Bestia / The Polish Dancer is the only exception. The film survived only because it was bought in 1921 by a New York film distributor. Years later, the American copy of the film - most likely the first Polish production to be broadcast in the United States - was obtained by Filmoteka Narodowa, a Polish public institution whose aim is to protect national cultural heritage in the field of cinema. The film has been digitally restored and will be screened for the first time on the big screen in Romania on June 20.

Released in 1917, the silent masterpiece directed by Aleksander Hertz is about the consequences of spontaneous decisions people make when they give in to their desires. Pola Negri plays the role of a young woman who wants to experience as much of life's pleasures as possible, which is why she constantly disappears from home. After a night of partying, harshly punished by her father, she flees the parental home for good and begins her adult life, getting involved in transient relationships and becoming a well-known cabaret dancer. Soon, her choices will have consequences.

The film's first screening in Romania will be accompanied at TIFF by Włodek Pawlik, the Polish artist who won the 2014 Grammy Award for Best Jazz Album. A versatile pianist, jazz composer and creator of film and theatre music, he has performed on all seven continents and has released no less than 24 albums during his career. He is the leader of the Włodek Pawlik Trio - known for their renowned jazz-rock albums and successful collaborations with artists such as Randy Brecker, Billy Hart and Richie Cole.

The Cine-concert Bestia accompanied by Włodek Pawlik is part of the Focus Poland section at TIFF 2022. The cine-concert premiered in 2018 at the New Horizons International Film Festival in Wrocław and is included in TIFF at the suggestion of New Horizons, with the festival receiving a Carte Blanche at the 2022 edition.

The cine-concert is organized with the support of MOL Romania, Biotrem, the Polish Institute of Bucharest, the Polish Film Institute and New Horizons.