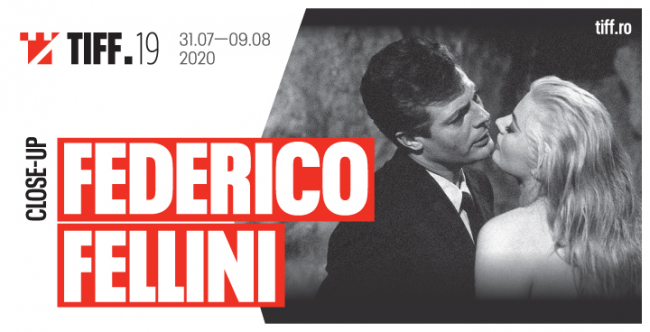 The always fascinating Italy, which has been in the world spotlight in this unusual year, also gets top billing at the Transilvania International Film Festival. Those who want to spend their summer vacation in Cluj-Napoca between July 31-August 9 will get to enjoy a generous dose of cinema italiano in Focus Italy, as well as a centennial celebration of one of the most influential filmmakers in history, Federico Fellini.

Close-up Federico Fellini presents six of his cinematic masterpieces, most of them digitally restored: I Vitelloni, La Dolce Vita, 8 ½, Giulietta degli spiriti, Amarcord, and La voce della luna. A master of desire, memory, and imagination, Fellini left behind over 20 flamboyant films that are both visually arresting and unmistakably melancholic. His unique contribution to world cinema was rewarded not only in Cannes, Venice, or at the Oscars, but also in the countless works inspired by him.

“There is no end. There is no beginning. There is only the infinite passion of life,” said Fellini. Born on January 20, 1920, in Rimini, this iconic 20th century director started out as a cartoonist and was inspired by reporter characters in American films to pursue a career as a journalist. He started out in film as a screenwriter shortly after he turned 20. By 1947, he got his first Oscar nomination for the screenplay of Roma, città aperta, which he had developed with Sergio Amidei and Roberto Rossellini. Eleven other nominations followed, as well as four wins for best foreign-language film — alongside Golden Globes, a Palme d’Or for La Dolce Vita, and awards in Venice.

His films are often autobiographical — his third feature, I Vitelloni (1953), is about the delayed development youngsters in small Italian town, as exemplified by five friends who are each at a turning point in their life. The film launched one of the most popular Italian actors, Alberto Sordi. La dolce vita (1960) secured his place among the most influential filmmakers of all time and became a huge box office success. Featuring Marcello Mastroianni and Anita Ekberg in iconic films, it is an acid comment on Europe’s moral decadence and toxic culture of celebrity. The charming Mastroianni also stars as the Felinni’s alter ego in 8 ½ (1963), a masterpiece on creative blockages and a behind-the-scenes look on cinema.

Giulietta degli spiriti (1965) features the sensational Giulietta Masina, Fellini’s life partner, as a betrayed wife exploring her subconscious in flamboyant, carnivalesque scenes that are Fellini’s trademark. Amarcord (1973) is a nostalgic memory of life in Rimini, traversed by eccentric characters which exemplify the Italians’ never-ending adolescence under the twin rules of fascism and catholicism.

Finally, the TIFF summer selection will also feature Fellini’s last film, La voce della luna (1990), which reaffirms him as the reigning king of style in Italian cinema, and takes audiences on a fantastic journey in search of the feminine ideal.