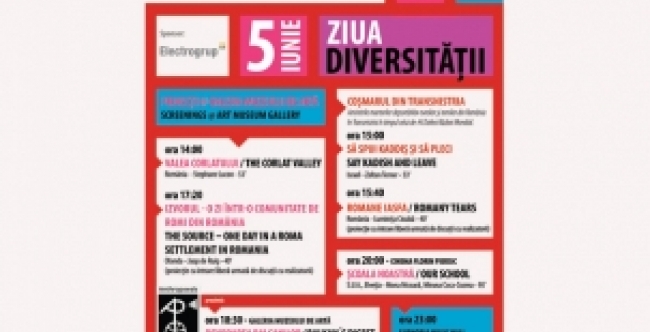 On June 5, the audience will have a full day. Diversity Day brings to TIFF 2011 a series of events at the same time varied and compelling.

Starting 2.00 p.m. The Art Museum Gallery will host the screening of The Corlat Valley / Valea Corlătului (d. Stephane Lucon). Presented during the Human Rights Documentary Film Festival One World Romania, the film describes the surreal situation of a Roma community living at the border separating the counties of Brașov and Covasna. A narrow valley crowded with houses makes up a village that doesn’t exist on any map, a nameless village that is refused its right to identity. Because most of the inhabitants are Roma, the place is called „the gipsy hood”.

The Art Museum Gallery will also screen two films that depict the experiences and memories of the Jewish and Roma people after being deported from Romania and Transnistria during the Second World War: Say Kadish and leave / Să spui Kaddiş şi să pleci by Zoltan Terner, scheduled for 3.00 p.m., Romany Tears / Romane Iasfa, by Luminiţa Cioabă, screened starting 3.40 p.m.

Romany Tears / Romane Iasfa is one of the two documentaries directed by Luminiţa Cioabă on the tragedy of the deportation of Roma people in Transnistria. The screening will be followed by a Q&A session with the filmmakers.

Starting 5.20 p.m., film lovers will be able to see The source - One day in a Roma Settlement in Romania / Izvorul – O zi într-o comunitate de romi din România, by Dutch director Jaap de Ruig. The entrance is free, and the screening will be followed by a Q&A session with the filmmakers.

6.30 p.m. has reserved another original film for the public’s attention: Balkan’s Digest / Almanah balcanic (d. Ionuţ Piţurescu). The film tells the story of Balkan diversity, of a man who refuses to surrender and of a culture that won’t give up it’s right to exist. The screening will be followed by a Q&A session with the filmmakers.

The access for all Diversity Day screenings at The Art Museum Gallery is free.

Starting 8.00 p.m., Florin Piersic Cinema will screen the documentary film Our School / Școala noastră, Mona Nicoară and Miruna Coca-Cozma’s feature film debut. The film centers on three Roma kids – Alin, Beniamin şi Dana – who try to overcome the division imposed by belonging to a different ethnicity. The shooting spanned over 4 years, following the evolution of each of the three protagonists and the ways in which they are willing to integrate in a society unwilling to accept them. The film starts in 2006, when the children are being transferred from a school at the outskirts of Târgu Lăpuș to a downtown one. They will have to have to face prejudices coming both from their teachers and their classmates. Both film directors will be present at the screening.

In addition to these special screenings, Diversity Day will be animated by two intense concerts. At 9.30 p.m., on the TIFF Meeting Point stage in the courtyard of the National Art Museum, Biokolective Swing and Balkan Morgana bands will sign an intercultural fusion mix, designing a memorable sound and movement show.

Baba Zula shows, held on hundreds of stages around the world, offer a complete audio-visual experience, with performances held in extravagant outfits accompanied by belly dancing, theatre, poetry and live VJ-ing. Their Dub Oriental sound is the result of a mixture of traditional instruments with electro and reggae music. Despite its completely exotic appearance, Baba Zula music has roots both in oriental traditions, and in the meaning and sonority of '60s rock'n'roll. Due to their extremely well defined style, they were included in Fatih Akin's documentary Crossing the Bridge (2005), an overview of the most important Turkish contemporary music trends.

The Transylvanian blues band Nightlosers combines the themes and sounds of Transylvanian traditional music with the American ones. Three studio albums, but also hundreds of concerts in Romania and abroad, have established them as one of the most original Romanian bands of the last two decades, whose media include the violin, electric guitar, drums, but also the harmonica or the washboard.