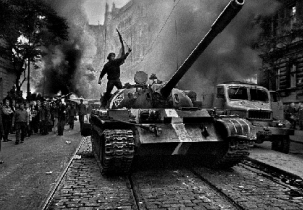 The exhibition is organised by the the French Institute and the Czech Centre in Bucharest.

During seven days in August 1968, the thirty years old Josef Koudelka realised a series of photos, which he later managed to take out of the country, when he immigrated to France. The photos were published by Magnum Photos agency in 1969, in many international magazines, on the occasion of the first anniversary of the invasion, without mentioning the author’s name. In the same year, Koudelka received an important prize: Overseas Press Club honored “the Czech anonymous photographer” with Robert Capa golden medal. Josef Koudelka, one of the most prominent contemporary photographers in the world, has been recognized as the author of the photographs only in 1985, after his father, who was still in Czechoslovakia, died.

One day before the troops of the Warsaw Pact, under Soviet command, invaded Czechoslovakia, Josef Koudelka – then at the age of 30 and renouncing a successful career in the aviation industry – had just returned from Romania, when he had photographed Roma communities. “This exhibition is about the invasion in which Romania was the only Warsaw Pact country that refused to participate.

Plus, there is also a personal memory that connects me to Romania – I was here many times and I love this country,” Josef Koudelka said.

A photo album with the title “Invasion 68 Prague” (Editura ART) will be available in bookstores in Cluj.