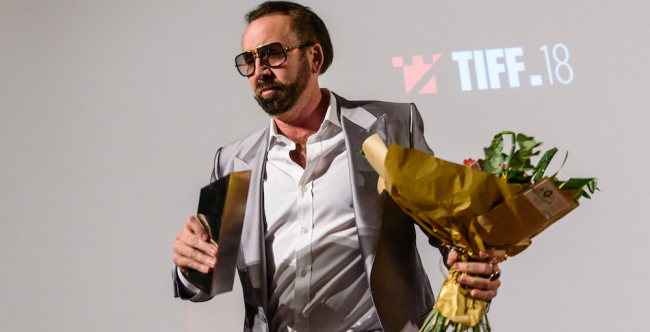 Relaxed, happy, and impressed by the large number of fans who came to the gala evening, on Saturday, June 1, Nicolas Cage came up on the Students’ Culture House stage to receive the Transilvania Trophy for Contribution to World Cinema.

“I’m very happy to be back here in your beautiful country. You know, I made two movies here…and both experiences were wonderful, I’m proud of those films. And that’s why I wanted to come back here and thank you personally for those experiences.” The actor declared himself fascinated by the spirit of the place and by Transylvania, as stories of about Vlad Țepeș affected his imagination. He also announced his intention to make another movie in Romania. “I will put this trophy on the nightstand next to my bed and when I’m feeling lonely at three in the morning, I will think of my friends here in Transylvania,” he added before the screening of one of his favorite films, John Woo’s Face/Off.

Dubbed by The Guardian as “the greatest American actor working today,” the superstar continued his TIFF program on Sunday, June 2, with a masterclass and a photo opportunity for fans. Talking to TIFF Artistic Director Mihai Chirilov, Cage shared behind-the-set details from the best-known films in his career and talked about what inspires him, about his craft, about his relationship to Hollywood, and about his future projects.

“Your greatest gift as a film actor or, if I can be so bold, in any art form is your imagination. That is absolutely your greatest resource. And next to it is your ability to believe in your imagination, to let yourself go with the imagination,” Cage said when talking about his sources of inspiration. To build the character that brought him a Best Actor Academy Award, the writer in Mike Figgis’s Leaving Las Vegas, Cage used an alcoholic uncle he hired as a consultant on set. He admitted to never expecting an Oscar when taking on the project, which had already been rejected by most studios and independents. He believes that making film in order to get awards is the wrong premise. This is how he ended up playing a very diverse array of roles in his over 40-year-long career, from blockbusters to independent productions.

The visit concluded with Cage introducing one of the most recent films in which he stars, Mandy (dir. Panos Cosmatos), at the.Banffy Castle in Bonțida. Cage’s presence at TIFF was made possible by CEMACON.

The first days of the coming week are dedicated to a blend of music and film. Tuesday, June 4, in the Arkhai Sculpture Park in Vlaha, TIFF will celebrate 50 years since the first Woodstock festival with the Oigan plays Dylan concert, which will precede the screening of Woodstock: Three Days that Defined a Generation which was launched at this year’s Tribeca Film Festival in New York. Film traces the festival that changed the world by gathering an entire generation around the ideas of peace and liberation.

On Monday, June 3, The Kabatronics, a fabulous blend of Brits from the TransGlobal Underground and Albanian brass masters from Fanfara Tirana will perform at the Students’ Culture House at 7 PM. Fans of innovative world blends can take the magic carpet from London to Tirana and beyond in the accords of Albanian kaba rhythms  influenced by reggae and transformed by hypnotic electronic music.

Music without frontiers will surely also wins over audiences on the night of Tuesday, June 4th, at 7 PM, at the Students’ Culture House, as the legendary French group Les Négresses Vertes, reunited after an 18-year hiatus, come to Romania fort the fist time after collaborating with Massive Attack and Howie B.

Tickets can be bought at box offices in Cluj, as well as through the official application, available through the Apple App Store and through Google Play. 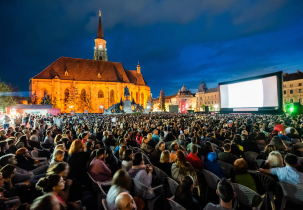