18.05.2012 18:10
Transilvania IFF announces yet another surprise for the 11th edition, the World Premiere of Noseland, a mockumentary directed by Aleksey Igudesman and Sebastian Leitner that will show the classical music in a way never quite seen before. 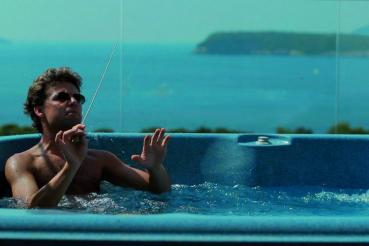 It all started when star violinist Julian Rachlin, director of an annual festival of chamber music in Dubrovnik, Croatia was convinced by his best friend Aleksey Igudesman, violinist, composer and wanna-be film maker, to let him direct a movie about his festival.

But things went wrong right from the start. Finding himself in the role of a somewhat oblivious producer, Rachlin watches how Igudesman manages to offend each and every one  of the artists he interviews. Asking boldly sincere and outright ridiculous questions like: "What does a conductor actually do?" and "Why does anyone come to a music festival in the first place?" the enthusiastic film maker doesn't stop even when he makes Sir Roger Moore cry on camera. And when John Malkovich starts ranting about how much Rachlin sucks, the festival director realizes the movie is becoming the last of his concerns.

Funny and emotional, Noseland is a humorous ode to the world of classical music and some of its star musicians. The film is brought to Transilvania IFF in partnership with SoNoRo- International Festival of Chamber Music- and will have a special screening on  June 8th at Cinema Victoria in Cluj, in the presence of directors Aleksey Igudesman and Sebastian Leitner, and producer Sabina Hasanova.