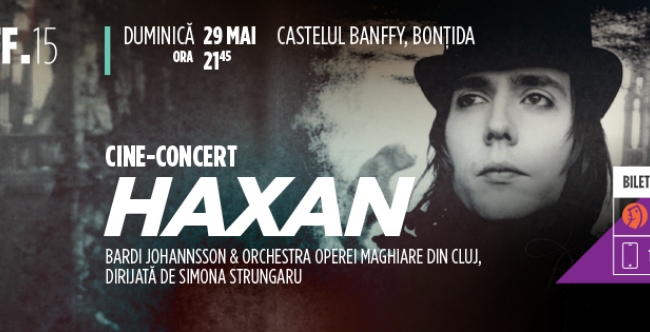 A multi-talented Icelandic artist and a controversial Swedish silent horror of the 20s, accompanied by a symphonic orchestra equals an unforgettable show at the Banffy Castle in Bonţida.

Bardi Johannsson has long been acclaimed as one of Iceland’s most intriguing creative enigmas. Sole member of Bang Gang and recently half of Starwalker with JB Dunckel (AIR, Darkel) Bardi is a composer, singer-songwriter, multi-instrumentalist, designer, presenter, satirist and fine purveyor of surreal humour. His work can be heard from Europe to Hollywood, from silent movies to major theater productions and to advertisements for haute couture.

The silent film is an unusual production of 1922 which was prohibited for many years in a row because of the screen representation of devil worship practices and excessive nudity. In 2004, the film was rediscovered by audiences and critics at the Parisian Forum des Images, where is screened with live music by Bardi Johannsson, who played two violins, percussion and electro. Subsequently, the score was arranged for a symphonic orchestra and played in 2005 by the National Symphonic Orchestra of Iceland. In 2012, the artist has accompanied live the same silent film at the Centre Pompidou in Paris.

The Transilvania IFF screening will take place in the Gothic ambiance offered by the Banffy castle and Bardi's original score will be played by the Hungarian National Opera Orchestra conducted by Simona Strungaru.

The symphonic orchestra that will play the score during Transilvania IFF will be conducted by Simona Strungaru, a pianist, conductor, orchestrator and film score composer who graduated from the Amsterdam Conservatory with a major in piano under the well-known professor Jan Wijn. In 2010, she conducted the world premiere of the opera S.A.L.O., by Michael Karr, a production of Prime Foundation and Grand Theater Groningen. In addition, she conducted the Banat Philharmonic from Timisoara in a one of a kind collaboration with Cobzality symphonic and Green Orchestra, for a Loredana live concert and for a URMA MTV Unplugged performance.