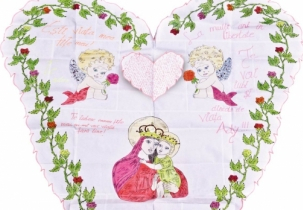 The TV mini-series Mildred Pierce, directed by Todd Haynes, stars Kate Winslet in a role that brought her an Emmy Award and a Golden Globe. The 6 and a half hours will certainly be a treat for the public.

The HBO documentary Heaven Hell directed by David Čálek, takes you on a trip in the world of kinky pleasures. You will meet men and women of different ages and professions who discovered pleasure in pain in this bold documentary that destroys prejudices.

Not far from the anterior subject And God created Sex original HBO documentary directed by Konrad Szołajski tells the story of a priest with peculiar hobbies. The charismatic character is best-seller author, is Family Consultant, and also participates at sex related conferences.

Caught Between Two Worlds, directed by Viktor Oszkár Nagy propose a journey in a refugee camp in Hungary. Different languages, different types of homesickness, different wounds and battles, all for adjusting to a new life in a new country.

Two more Romanian documentaries are screened in HBO DAY. Digging for Life by Pavel Cuzuioc is a one of the finalists at HBO National Scriptwriting Competition. Visiting Room by Radu Muntean and Alexandru Baciu follows the story of inmates from different penitentiaries who found their soul mates in prison. This prison romance won this year the Gopo Award (Romanian Film Industry Award) for best documentary.

All HBO original productions will have free admission at Transilvania IFF.

Saturday, June 9 at Transilvania IFF Closing Ceremony, HBO and TIFF will announce the winners of the annual National Script Contest. More and more winners who get noticed in country and abroad demonstrate the quality of this contest each year.